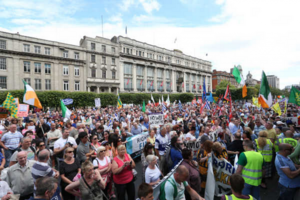 Irish Water protesters outside the GPO in Dublin on June 20, 2015

Irish Water has confirmed there was almost a 50% reduction in revenue collected in water charges from bills sent out in April and May.

The bills relate to services used from January to March and were issued as the Government announced plans to suspend charges for nine months and set-up an expert commission to look at the funding model for domestic water services.

Figures released by the company show that the amount collected in charges was €18.3m, down from €33.4m for the previous quarter.