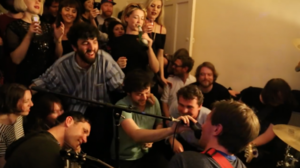 One song’s odyssey through different band configurations and venues big, small and homely.

This new video, by Daniel Martin, follows the journey of the song since its release, from house shows to festivals, via rock clubs and dive bars.

It also depicts the ever-changing cast of No Monster Club, as it flits everywhere from a solo project to a five-piece band.”

No Monster Club’s debut 7″ EP, Where Did You Get That Milkshake?, will be released on Emotional Response Records on September 5.