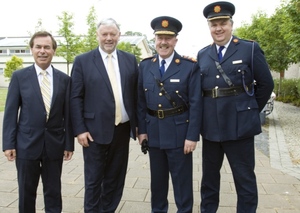 Assistant Garda Commissioner John Fintan Fanning, who claimed he was asked unfair questions during an interview for the post of Deputy Commissioner, lost his case in the High Court this morning.

He was seeking injunctions restraining the recruitment process for the post.

He claimed that, during his interview, the Irish Water protests and the Jobstown protest, involving Joan Burton, were discussed.

The Irish Times, in April, reported that he told the High Court: “While I was conscious of how my answer might be interpreted, I insisted that, as we live in a democracy, it was the duty of the gardaí to enforce all the laws that the Oireachtas created.”

The case was discussed on News At One earlier today…

Richard Crowley: “Assistant Garda Commissioner John Fintan Fanning, while being interviewed for the position of Deputy Commissioner has been refused injunctions, restraining the recruitment process for the post. John Fintan Fanning claims the nature of the questions, along with several other factors rendered the conduct of the recruitment process unfair and flawed. Our crime correspondent Paul Reynolds was covering this. Paul tell us more about this case?”

Paul Reynolds: Richard this case is all about two of the top three positions in An Garda Siochana post of deputy commissioner. There were interviews held for this post and the assistant commissioner Fintan Fanning, who’s in charge of the Midlands area at the moment, was one of seven people who were shortlisted for interview. Now this was a high power panel that they went before. It included people like Sir Hugh Orde, who was the former president of the Association of Chief of Police [Officers], Dermot Gallagher, who’s the former secretary general at the Department of Foreign Affairs and the former chairman of the Garda Ombudsman Commission, Margaret McCabe, from the Public Appointments Commission. So this was, if you like, a heavyweight panel that assistant commissioner Fintan Fanning went before.

“Now he was interviewed for the post and then he was told the next day he wasn’t, that his interview hadn’t been been successful. But then he subsequently took a case to the High Court and he claimed that he’d been asked unfair questions during the interview, about his views on left-wing political extremists. He also claimed that the process was flawed for a number of reasons, including because of the nature of the questions that had been put to him by the current Garda Commissioner Noirín O’Sullivan. Now the Public Appointment Commission opposed his case. They denied that he had been asked unfair questions and they said that the questions asked of him had been related to his views on matters such as the main security threats to the State. So the case was heard for two days earlier this year, in the High Court. Mr Justice David Keane gave his judgement today.”

Crowley: “And he said that Mr Fanning’s precise allegations concerning the allegedly unfair line of questioning put to him remains, “frustratingly unclear”.”

Reynolds: “Yeah and, aswell as that, he said that Mr Fanning’s own assertions were too vague and  inconsistent. He said that Mr Fanning did not demonstrate that there was any question regarding his own personal views in relation to any politician or any political party. He also found that it was inconceivable  to suggest that it was inappropriate or indeed improper or unlawful to ask any candidate about their views on security or terrorist threats. And he also found that it was inconceivable  that any objective person could reasonably  apprehend bias on the part of the current Garda Commissioner Nóirín O’Sullivan.”