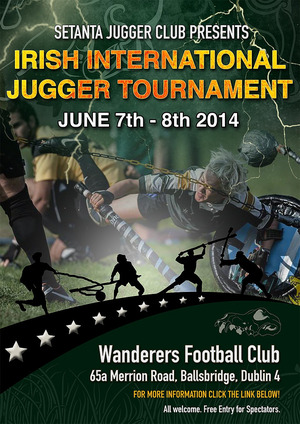 “I play a sport called Jugger, its sort of like a 5-aside game of rugby, where four players on the team are armed. So it looks like like a cross between rugby and fencing. It’s a very fun sport, and is actually quite big in some places internationally even though its very small here. We’re holding a an international tournament on the 7th and 8th of June where German, Spanish, American and Irish teams will be competing, and want to spread the word so people can come see what its like and enjoy the spectacle. We’ve been representing Ireland in quite a few Jugger tournaments abroad, and we’re looking forward to doing it on our home ground again. The girl in the air is Marion, one of our players btw.”