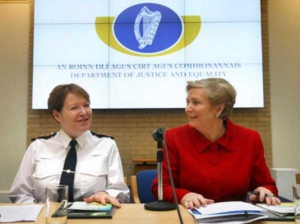 Garda Commissioner Nóirín O’Sullivan will appear before the Policing Authority

The Policing Authority was established on January 1 of this year to “oversee the governance, structures and performance of the Garda Síochána in the policing area“.

According to the agenda of the meeting, Ms O’Sullivan will discuss the recommendations made following the O’Higgins report – which made a series of findings about serious Garda malpractice in the Cavan-Monaghan division.

Readers will recall how, during the O’Higgins’ Commission of Investigation into Sgt Maurice McCabe’s allegations, Colm Smyth, SC, initially told Judge Kevin O’Higgins that – on behalf of Ms O’Sullivan – his instructions were to “challenge the integrity of Sgt McCabe and his motivation”.

This was claimed to be based on a meeting in Mullingar between Sgt McCabe and two gardaí.

Several months later, on the day Commissioner O’Sullivan was due to give evidence – by which time Sgt McCabe had produced a transcript of his meeting in Mullingar with two gardaí – Mr Smyth told Judge O’Higgins: “The position now is that his motive is under attack, credibility is under attack from the Commissioner. But not his integrity.”

Meanwhile, this morning – before Commissioner O’Sullivan’s appearance – the Policing Authority will discuss the matter of Garda appointments.

Readers will note how, in May, the Government approved the appointment of four assistant commissioners.

In addition, it was reported that further senior appointments were in the process of being made – even though, under pending new legislation, the Policing Authority was to take over the responsibility, from the Government, for senior Garda appointments or promotions.

At the time, Francesca Comyn, in the Sunday Business Post, reported:

Nóirín O’Sullivan’s husband, Detective Superintendent Jim McGowan, is among 18 tipped for elevation. Another name of note understood to be on the list is Superintendent Thomas Maguire – the senior officer who, back in 2012, recommended that Sergeant McCabe be the subject of a disciplinary inquiry. The probe related to a computer, seized as evidence in an investigation, which went missing in Garda custody.

Maguire later exonerated McCabe, but the inquiry he conducted was criticised by O’Higgins in his report. He was found to have withheld statements from the whistleblower and initially preferred, on a paper review, the conflicting evidence of another garda over that provided by McCabe.

In July, the Department of Justice announced that it had appointed ten people to the position of Chief Superintendent and 18 to Superintendent – before the new appointments process, under the Policing Authority was introduced.

Mr McGowan and Mr Maguire were among those promoted.

In September, Josephine Feehily, chair of the Policing Authority, told the Oireachtas Justice Committee that it was disappointed that it had not been consulted about the senior garda appointments made earlier.

Yesterday, it was reported that the responsibility for Garda appointments will move from the Government to the Policing Authority from December 31 – just as Justice Minister Frances Fitzgerald announced 11 new Garda promotions, comprising of one assistant commissioner, three chief superintendents and seven superintendents.