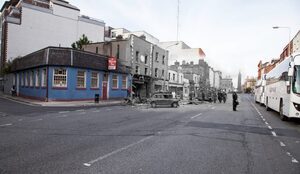 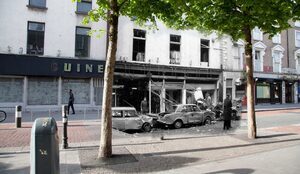 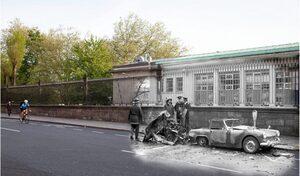 Today Is the 43rd anniversary of the Dublin and Monaghan Bombings in 1974.

Thirty three people were killed and 300 injured when three car bombs in Dublin and one in Monaghan were detonated.

I don’t believe in the concept of an ‘objective truth’. One’s perceptions are always influenced by time, place and one’s paradigm. But I think that a great deal of postmodern criticism and the ‘objective’ position has thrown out the baby (a fair shot at what actually happened) with the bathwater of bias.

It is fair, therefore, that I make it clear where I am coming from when I write about the 1974 Dublin Bombing – which, remember, killed 27 people on the spot and injured 137 others, a few so seriously as to cause their deaths late on.

It was not nothing. It was a major outrage.

One of my daughters, who was a student at the Royal Irish Academy of Music around the corner on Westland Row, was there are the time and place of the South Leinster Street bomb. And I visited both sites There has been a long debate about who did it.

In his book, Garret FitzGerald says simply, ‘Bombs set off in Dublin by Loyalist paramilitaries.’ I think that is too simple. It was a time of crisis: the Loyalist strike and the collapse of the Sunningdale Agreement.

I hope I always make a distinction between ‘I know’ and ‘I believe’.

The former indicates evidence exists that I find convincing, strong enough to stand up in a court of law. But one cannot live life like that.

I have many important beliefs, which cannot be so validated, but on which I am willing to base actions. In the latter case, I hope I will always say ‘I think’ and ‘I believe’ rather than ‘I know’. The Dublin bombing is like that.

I came to the conclusion that there was some collusion between Loyalist paramilitaries and British military intelligence (the last two words are oxymoronic), and I said so. There are lunatics and mountebanks in all intelligence services, in my very limited experience, as well of course as decent people doing their duty.

But I have no doubt that the policy was to soft-pedal investigations, though they had killed a lot of innocent people. We must not offend the British; we must not give comfort to the IRA.

But again it seems to me that not pursuing the matter was precisely the sort of weakness that validated the IRA’s physical force policy: ‘If the government in Dublin won’t protect us from Loyalist and British thugs, we have to do it ourselves.’

Quite a powerful argument in a nationalist ghetto. We left a couple of decades of nationalists feeling that the government in Dublin had betrayed them.

The outcome of long agitation was the eventual setting up of a tribunal under a very distinguished Supreme Court judge, Mr Justice Barron. In the conclusions of the Barron Report, he deals mainly in what he can prove.

But the doubts remaining, which he also expresses impeccable fairness, I believe to be terrifying. The consequences are alarming.

I think this was an example of state terrorism by the British. I believe that my country, at a time when I was part of the government, also practised state terrorism, and though unaware of this at the time, I am deeply ashamed.

All this I feel is worth saying because I believe that state terrorism is widespread, and I hate all terrorism, wherever it is coming from.

The argument that ‘we’ are nice and therefore don’t do it, while ‘they’ are nasty so they it all the time, simply does not convince. Consistency is important. To have two standards is bad: ‘What is sauce for the goose is sauce for the gander’

From Nothing Is Written In Stone: The Notebooks of Justin Keating (Lilliput Press)

Justice For The Forgotten