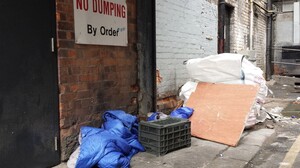 When you spot what you think is an extraordinary typo, it’s hard not to do a double take.

So when Galway City Council says its bill to house homeless families in the area was just €360 in January this year, but almost €26,000 for the month of September, you think – surely some mistake?

But, when checked with the council, the dramatic sums are indeed correct.

Four Galway families with 15 children needed emergency shelter in the first two weeks of this year, but by early October, that swelled to 17 families with 43 children.

According to our Freedom of Information(FOI) request to officials in Galway, the children involved range in age from infancy to 17 years old.

Up to now, the family homeless spotlight has been fixed on Dublin, but fresh stats we sought confirms this aggressive social disease is almost nationwide.

Another FOI by our new awareness campaign,@KidsNeedAHome, reveals that Waterford City & County Council paid €6,370 for homeless families in B&Bs in September, compared to €2,540 last January.

Authorities in Waterford added that up to the end of last month, on average there were 42 family “presentations per calendar month to the homeless services” comprising a “mixture of singles, couples and those with child dependents”.

In Limerick, 21 children in nine families were homeless in early October, according to Limerick City & County Council, compared to 11 kids in eight families in the first two weeks of 2015.

Authorities in Sligo said that in mid-October one family required emergency accommodation. Sligo County Council also named three hostels it uses for homeless clients, and these premises are paid between €12.70 and €17.50 per bed, per night.

It added that hotel and B&B use in Sligo town and county is “entirely dependent upon availability and season”.

But a significant increase in homeless families is likely to be revealed there too, on current indications. Rents in Cork city, stated a report this week, are now almost 14pc dearer than a year ago.

The above stats are damning, and future social historians may ask how on earth did we let this happen, in an era of relative prosperity.

The child casualties at the centre of this mess are facing into a harsh winter, and a far different version of Christmas than they wished for.

When schools around Ireland close this afternoon, more than 1500 children will head back to a B&B, a small hotel, or chaotic hostel, where privacy, dignity and safety may be largely absent. Some in Dublin are forced to take multiple buses just to reach their temporary lodgings, far from their school.

Our appeal today is that Broadsheet readers make this an election issue when polished politicians come knocking for a vote.

Because at this moment, Ireland – may well be – the worst small country in the world in which to be homeless.

For those who wish to follow our efforts, we are on @KidsNeedAHome