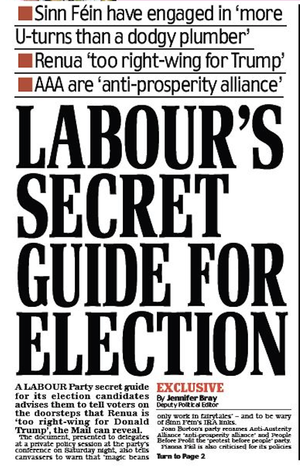 Further to this morning’s story in the Irish Daily Mail by Jennifer Bray, about the leaking of a Labour Party secret guide for its election candidates, Ms Bray spoke on RTÉ’s Today with Seán O’Rourke about the 30-page document.

She explained Labour party canvassers have been told to tell their constituents the following about other parties on the doorstep:

‘They offer nothing new and the economy shouldn’t be handed back to them.’

‘Fianna Fáil were the ones who signed the country up to water charges.

‘People should be very afraid of them serving in Government, they won’t be able to stick to their policies, if in fact they were in Government.’

‘Magic beans only work in fairytales.’

‘If Fine Gael were to go into government by themselves, they’d be a very different party without the balance of Labour.’