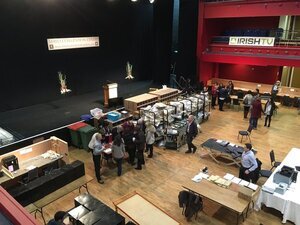 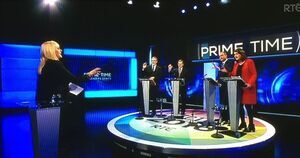 The final leaders’ debate on RTÈ on Wednesday night

The national broadcaster and the main papers kept the distorted coverage going.

Reporting on its exit poll [on Friday night], the Irish Times said, “An inconclusive outcome does not even begin to describe what we are left with.”

…Fine Gael and Labour asset-stripped the people in order to implement policies which Michael Noonan, in opposition, said were not only unfair but obscenely so.

And then declared themselves the parties of stability.

And the media obliged by selling that message with ferocious zeal.

No one is more gullible than the media when convinced it’s doing a public service by sucking up to those in power.

…The most significant media intervention was RTÉ’s decision to frame the election as an exercise in which the four top parties were supposed to generate the makings of another of those Penny-farthing Coalitions..

…By cutting out everything but the four top parties, in the last debate before the vote, RTÉ obscured the reality of the election – and did so deliberately.

As I type this, I have one ear glued to RTÉ radio as the results come in. An expert has just explained that Enda and Joan made a mess of the TV debate because they failed to mount enough attacks on Gerry Adams.

…Enda and Joan and Micheal Martin could hardly have assaulted the poor bastard more grievously without tying him down with piano wire and pouring molten wax on his nipples. 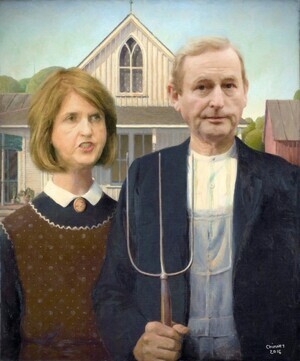 Sinn Fein on 14.1% have to be somewhat disappointed even if this would represent a significant leap forward in Dáil representation.

Of the smaller parties, the Greens may be happiest on 3.5% – almost double what they got in 2011 and will be looking forward to getting back to the Dáil.

The big winner has to be the group of independents and others on a staggering 28%.

This unprecedented group of loose alliances and independents is likely to be seen as the chief stumbling block on the way to formation of a government- it may even make the election of a Ceann Comairle a bit tedious.

If this result is replicated tomorrow, we can look forward to a high turn over of deputies and many “Portillo moments” with many unexpected newbies triumphing as well.

On these numbers, it’s hard to think of any other possible result than some arrangement between the two civil war parties and a second election in a few months.

It hardly seems worthwhile taking down the posters.

Shane Heneghan is a Galway-based psephologist 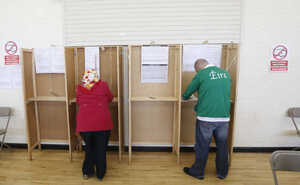 Voting this morning in St. Joseph’s National School on the Navan Road, Cabra in the Dublin West constituency

You’ve had your say.

Now have your say. Again. 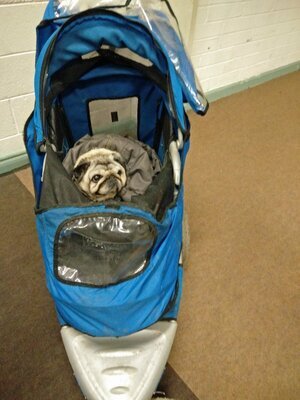 Pram-bound Pug puppy Otto at a polling station in Clondalkin, Dublin 22 this evening. 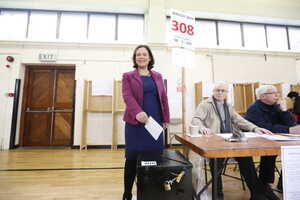 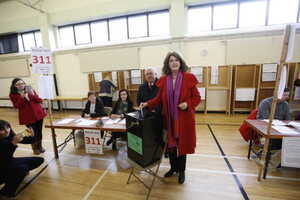 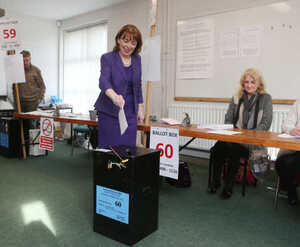 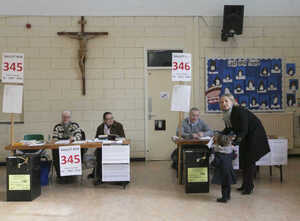 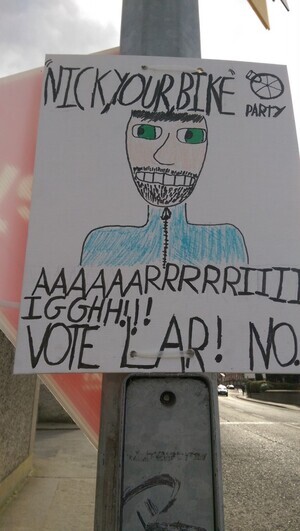 Disgraceful poster just outside a polling station in Rathmines [Dublin 6] 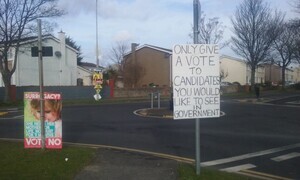 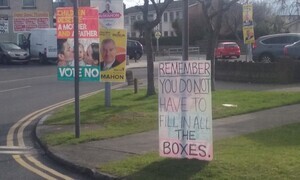 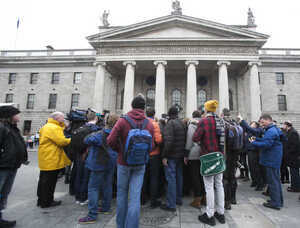 By presenting voters with a stark choice between “stability” and “chaos” elements of the establishment media went too far in General Election 2016.

Has there ever been a General Election campaign in Ireland before in which the role of some elements of the mainstream media seemed so clear? Not to report the truth, or to compare policies, but to cheer on the establishment parties and spread an irrational fear of change.

For months now, we’ve been told that this election is giving us a choice between “stability” (voting for the parties who either bankrupt the country or imposed austerity on thousands of us) and “chaos” (God forbid if those upstarts from Sinn Féin or the small left wing parties came within a million miles of power).

Sometimes the mask slips, and you wonder whether Irish democracy is any better than the kind of electioneering you would find in modern day Russia or even North Korea.

Such as when the nation’s biggest selling newspaper gives over its main story to attacking Sinn Féin policies for three days in a row. That’s not balanced election coverage, that’s naked propaganda.

There is nothing wrong with challenging a party which has a sinister past, especially if they are a rising force on the brink of gaining power for the first time in the Republic.

But where is the investigative journalism into the policies of the Fianna Fail party which caused the economic crash less than a decade ago? Are they really ready to return to power?

And where is the acknowledgement that, by going into power with the DUP and embracing the peace process, Sinn Fein have actually come a long way in the space of a few years?

Where is the analysis of why the Labour Party abandoned their core voters (and all their principles) or why Fine Gael think it’s perfectly acceptable to punish so many for the sins of so few?

The same newspaper sent a representative, a crime reporter, onto the nation’s most popular chat show at the weekend.

He managed to insult hundreds of thousands of people on Friday night by suggesting that anyone who supports Sinn Fein’s position on the Special Criminal Court is a drug-dealer, a killer, or a thug.

People have a right to be concerned at the prospect of former terrorists going into Government, but blatant scare-mongering is another thing.

…It was hard not to see his Late Late Show appearance as a hatchet-job on Sinn Fein just a week before the election.

On the day after his TV appearance, thousands of people marched through the streets of the capital to protest against austerity. The Right 2 Change march merited just one paragraph, and not a single photo, in one of the nation’s biggest selling Sunday papers the following day.

Six days before the election, thousands of people insisted that austerity was still a big issue. They said that the march was about so much more than Irish Water. But a Rupert Murdoch-owned ‘paper decided their march did not merit any coverage, even though so many of them took over the city centre.

Sadly, the people who cover politics in Ireland largely move in the same circles as the political masters they write about. They broadly share the same views, seeing nothing wrong with the bank bailout or Ireland’s failure to stand by our Greek cousins when they sought debt relief last year.

To support Syriza in their hour of need would have involved challenging the status quo and an admission that the Irish were wrong. And nobody in the Irish Government wanted that.

So we get “fluffy” pieces from the campaign trail, in which reporters get access to our leaders as long as they play by their rules.

…In this election, we should be grateful for social media. The landscape has been transformed.

When people see videos of 100,000 people marching through Dublin city centre on Facebook, getting next to no coverage on national television, they begin to ask about pro-Government “spin”.

More and more, people are beginning to ask questions about the information they are being fed.

We see Irish Water protesters being labelled as the “sinister fringe” on the TV news, but the only footage we see of Gardai beating up protesters is away from the mainstream media.

On Facebook or Twitter, you can see photos of thousands upon thousands marching through the streets of the capital to protest against austerity, even if those images rarely end up in the national newspapers or on TV.

You can see the establishment politicians make fools of themselves, by trying to defend the indefensible in unguarded moments on Twitter.

You can find out about the parties’ policies by accessing their websites and avoiding the scare-mongering among some elements of the media.

By all means, question the policies of left wing groups such as PBP-AAA and Sinn Fein. A hung Dail, with so many Independents, is a scary thing. Perhaps they would lead Ireland to ruin. Fianna Fail certainly should know – they led Ireland to ruin only five short years ago.

People don’t like to think they are being brainwashed or led a merry dance by those who have hidden agendas or a vested interest in holding onto power.

There is some vile stuff out there on social media, but it’s only there that you get a real taste of the anger running through the housing estates and parts of rural Ireland over the past five years. That anger rarely gets a look-in on national TV or our newspapers.

We have so many sources of information in 2016 that people can see right through the “spin”, in a way which would have been unthinkable before the advent of Facebook and Twitter.

That can only be a good thing, when we’re sometimes faced with the kind of propaganda which would not seem out of place in North Korea or Cuba.

The media, the election, and the politics of fear (Ciaran Tierney) 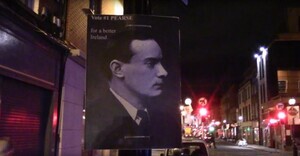 If only we could vote for people like these… 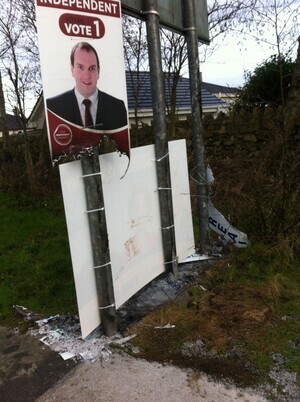 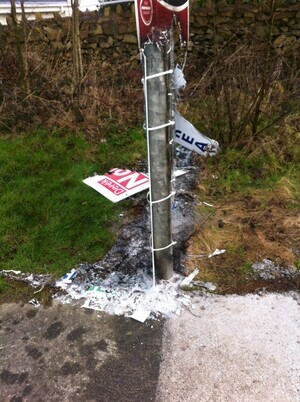 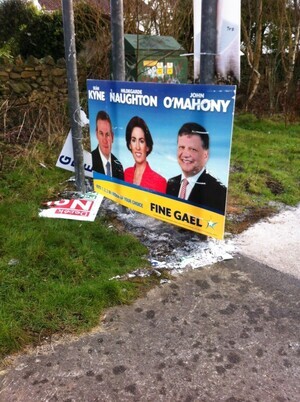