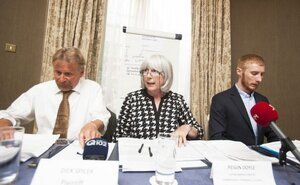 Dick Spicer, of the Humanist Association of Ireland, his son Norman Spicer, and writer and publicist Peigin Doyle, from Sligo, hold a press conference to explain Dick and Norman’s legal challenge over the Government’s decision to give ownership of the proposed National Maternity Hospital at the St Vincent’s Hospital site in Elm Park to the Religious Sisters of Charity.

Niamh Lyons, in the Ireland edition of The Times, reports:

A High Court summons has been filed by two private citizens, Dick Spicer and his son Norman Spicer, against the state, the health minister and the attorney-general.

Dick Spicer, 70, is a founding member of the Humanist Association of Ireland and has a track record of campaigning on church and state issues. He played a significant role in the divorce referendum.

The plaintiffs believe that placing the maternity hospital under the “religious influence” of the SVHG will be judged to be unconstitutional and are demanding that the government abandon the plan.

State to be sued over nuns’ role in new hospital (Niamh Lyons, The Times Ireland edition)