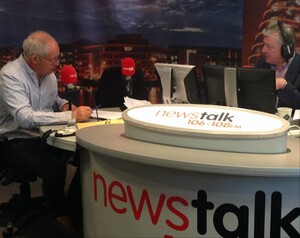 Further to the resignation of Dr Peter Boylan, former Master of the National Maternity Hospital at Holles Street, from the hospital’s board.

Following more than a week of claims and counter-claims concerning the running of the proposed new National Maternity Hospital on the St Vincent’s site.

And the non-publication of any memorandum of understanding or articles of association between Holles Street and St Vincent’s.

Dr Boylan spoke at length to Pat Kenny, on Newstalk this morning.

During the interview, Dr Boylan said: “the devil of this is going to be in the detail. And the memorandums and articles of association have not been, the work has not even been proceeded yet..”

He also said he hopes “the public debate will persuade [the hospital’s shareholders/governors] that it’s a very fragile deal, flawed and, inevitably, I think will cause huge conflict in the running of the hospital”.

Pat Kenny: “First of all, by text on Sunday, from Rhona Mahony and from Nicky Kearns, you were asked to resign. Did that matter come up as an issue, as a motion at the board meeting last evening?”

Peter Boylan: “No, it didn’t. I don’t really want to say an awful lot more about the meeting last night because I gave an agreement that it would be confidential.”

Kenny: “Yeah. But it did come up? Like there was no great move to oust you or anything like that?”

Boylan: “Well, there was no motion put to the board that my resignation should be given.”

Kenny: “I presume you can tell us what is already in the public domain that there was a vote on the issue in question. Because we know that there is a majority on the board. How big a majority was it and how comfortable of a majority and how many dissident voices might there be?”

Boylan: “The vote was overwhelming.”

Boylan: “In favour of the agreement.”

Kenny: “This leaves you, probably, a bit isolated because you had initially been a lone voice although the Lord Mayor of Dublin has added his voice. And there are two separate issues at the heart of this. One is the ethical issue which you have highlighted and then the second issue is the idea of handing over €300million of taxpayers’ money to a private entity. I’ve suggested already that, you know, they wouldn’t do it to Jimmy Sheehan from the Blackrock Clinic but they have decided to give it to St Vincent’s Healthcare because they want the synergies between the two hospitals. So, addressing both of those issues. One may have been resolved between the two boards that they think they can cobble together an agreement with all the safeguards that the minister thinks he will have in a month’s time. But the other one is a more general thing about what ministers do on our behalf with our money.”

Boylan: “Yes, you made reference there that I was a lone voice. That’s correct, more or less, on the board. But I’m not a lone voice in the community, outside, to which we have a great responsibility, to the women in particular. I’m also not a lone voice in the medical profession in that the previous master of the Coombe Hospital, Chris Fitzpatrick, and the previous master of the Rotunda, Sam Coulter-Smith. They’ve both voiced serious reservations about the governance proposed structures. So with regard to the agreement itself, there is a lot of issues with it. And the major ones are transfer of ownership of the National Maternity Hospital outright, 100% to the Religious Sisters of Charity on land that they own. The company that will run the hospital will be owned outright by the Sisters of Charity.”

Kenny: “Now, last time we spoke, you talked about the structure of the National Maternity Hospital. It’s national in name.”

Kenny: “There’s excellence in all of the major maternity hospitals.”

Kenny: “But the structure is that there’s a board of governors who are the people in whom ownership is vested. Are they happy that their ownership is being transferred lock, stock and barrel to the St Vincent’s Healthcare Group?”

Boylan: “Well, they haven’t been asked.”

Kenny: “But how can that be legal? Unless they…”

Boylan: “I don’t know about the legality of it but there is no legal document in existence on which the governors, the owners, the shareholders of the National Maternity Hospital can vote. And the devil of this is going to be in the detail. And the memorandums and articles of association have not been, the work has not even been proceeded yet…”

Kenny: “So is it your understanding that they kind of maybe did a survey of the governors, checked them out and said, ‘will you be in favour of this thing?’. And they kind of gave them the nod. Because it is bizarre that any attempt to move ownership of a resource, whatever that might be, without the consent of the vested owners, would be bizarre?”

Boylan: “It would be bizarre and it is bizarre. I think, to be fair, that it’s likely that the governors would, the shareholders of Holles Street, probably would agree to the transfer because they would be convinced by the arguments. Now, hopefully, the public debate will persuade them that it’s a very fragile deal, flawed and, inevitably, I think will cause huge conflict in the running of the hospital. It’s been said that the nuns are not going to run the hospital, that’s absolutely correct. They’re not going to run the hospital and I have never suggested that they would run the hospital but they own the hospital, they own the company that runs it and they’ve undue representation on the board.”

Boylan: “With immediate effect. I can’t remain a member of a board which is so blind to the consequences of its decision to transfer sole ownership of the hospital to the Religious Sisters of Charity and so deaf to the concerns of the public which it serves.”

Kenny: “You have reiterated in your letter of resignation a number of the issues that you’ve been talking about this past couple of weeks. Remind us of what they are.”

Kenny: “But didn’t one of your successors in the job of master, Declan Keane, I think, said he had performed, I think it was, a sterilisation in his private practice in St Vincent’s.”

Boylan: “No, he performed two, not in his private practice, but some women with very complicated pregnancies where the placenta, the afterbirth, is invading the uterus, will need to have a hysterectomy but sometimes you can preserve the uterus and in those circumstances the reasonable thing and what the women would wish, usually, is that they have a sterilisation…”

Kenny: “But if you could do that in St Vincent’s, does that not suggest that they…”

Boylan: “Well, he had to get permission to do that whereas…”

Kenny: “He had to ask for permission?”

Boylan: “Yes, as a matter of courtesy, from the clinical director of the hospital. So, in the National Maternity Hospital and in hospitals without religious influence, you just do it, it’s a matter between the patient and the doctor herself, as it should be.”

Yesterday: Where’s The Memorandum Of Understanding?