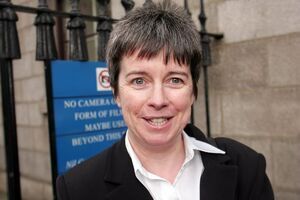 Louise O’Keefe after her 2014 victory

What has happened in the four years since the state was made to take its share of blame for the abuse in National Schools in Ireland?

For decades, the State failed to implement child protection frameworks in national schools. The European Court of Human Rights has already ruled [in the Louise O’Keeffe case, 2014] that this was partly to blame for abuse in those schools, but the State continues to fight survivors of abuse tooth and nail...

…The O’Keeffe judgment ought to have been a watershed moment in which the State’s role in facilitating heinous sex crimes against pupils in national schools was fully acknowledged and accepted.

Instead, the State immediately went into damage limitation mode.

Taoiseach Enda Kenny’s apology to Louise O’Keeffe pointedly referred to children “in the location where she was”, failing to acknowledge that the judgment concerned a systemic failure to supervise child protection in national schools rather than a specific failure to respond to a complaint in Dunderrow.

This pattern continued when a redress scheme was established for victims of sexual abuse in national schools as part of the State’s implementation of the judgment.

The scheme limited redress to those victims who could establish that their abuse had occurred in the aftermath of a prior complaint which had not been acted upon.

First, this distorts the true basis of liability in the O’Keeffe judgment. As the Court observed, the State’s obligations were

“not fulfilled when the Irish State … continued to entrust the management of the primary education of the vast majority of young Irish children to non-State actors (national schools), without putting in place any mechanism of effective State control against the risks of such abuse occurring”.

The emphasis was on risk and the need for preventive measures, not on investigation of actual abuse.

To say otherwise is equivalent to saying that a search party is an adequate substitute for a stable door. 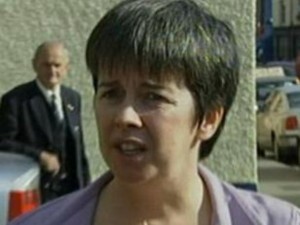 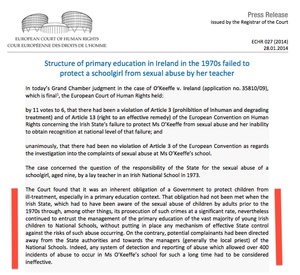 [Louise O’Keefe, top, and the press release about her victory from the European Court of Human Rights this morning]

Ms O’Keeffe took legal action against the Department of Education, arguing that the State had failed to put in place appropriate protection measures to prevent and stop systematic sexual abuse at her school.
However, the High Court dismissed her claim that the State was liable.
The Supreme Court subsequently upheld that ruling, finding that while the State funded the education system, the management role of the Catholic Church was such that the State could not be held vicariously liable for the criminal acts of the teacher.
The European Court of Human Rights was Ms O’Keeffe’s final legal opportunity to have the Irish State held liable for the sexual abuse she suffered.

What’s it all about?

This case and its finding that Ireland breached the provisions of the European Convention on Human Rights raises interesting implications given the terms of the European Convention on Human Rights Act 2003.
In particular Section 3 which provides that every organ of the State shall perform its functions in a manner compatible with the State’s obligations under the European Convention on Human Rights and that a person who has suffered injury, loss or damage as a result of a contravention of this obligation may, if no other remedy is available, institute proceedings to recover damages from the State, provided that same are instituted within one year of the breach.
Although the strict time limit may limit the application of this section in respect of sexual abuse which has taken place more than a year ago, the possible liability of the State under Section 3 in respect of acts of abuse going forward, is likely to have very significant repercussions.
However we will have to await the judgment to see the extent to which the finding as to the State’s liability was based on the particular facts of Ms O’Keefe’s case and the serious and blatant nature of the abuse to which the State appears to have turned a blind eye.
As regards past acts of sexual abuse it’s also worth noting that a court hearing an application under Section 3 has the power to extend the time limit backwards where this is regarded as required in the interest of justice