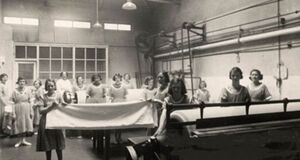 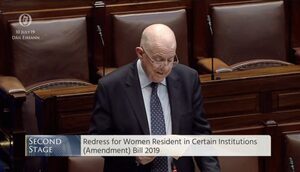 He explained that the purpose of the bill was to amend the Redress for Women Resident in Certain Institutions Act 2015 – to ensure women who would have worked at Magdalene Laundries but lived in adjoining institutions, as opposed to the laundries themselves, can receive compensation via the Magdalene Restorative Justice ex gratia scheme which was set up in 2013.

The bill is also designed to ensure that awards received by the women won’t be taken into account when assessments are made for their nursing home supports.

The move follows Ombudsman Peter Tyndall who published a report in November 2017 called Opportunity Lost – An Investigation by the Ombudsman into the administration of the Magdalene Restorative Justice Scheme, in which he criticised the Department of Justice for its administration of the scheme and it’s exclusion of the women who worked at the laundries.

“The purpose of this amending Bill, which is short and technical in nature, is to apply these same health benefits to those women who qualify under the November 2018 addendum to the Magdalene redress scheme.”

However, he also said:

“There were three other recommendations of the Ombudsman. These relate, first, to assistance to applicants who lack capacity to accept an award and second, to a review of those cases where there is a dispute in respect of length of stay in a Magdalen institution.

“A senior counsel was appointed to carry out both these tasks.

“All but one of the capacity cases have now been resolved and the review in relation to the length of stay issue is ongoing.

“The third recommendation by the Ombudsman was that guidance should be provided for future redress schemes.

“A working group led by the Department of Public Expenditure and Reform is examining this issue.

Also, it’s extremely worrying that – according to tonight’s Dáil record – the government is reviewing how it conducts redress schemes without any public call for submissions. @ConorUCCLaw @maireadenright @MarieOConnor1 @maglaundries

In addition, Marie O’Connor, chair of the Survivors of Symphysiotomy, also tweeted her thoughts…

Yesterday: Who Came Up With The ‘Prior Complaint’ Requirement?

Last month, Conall Ó Fátharta, in the Irish Examiner, reported that barrister Mary O’Toole is carrying out the review mentioned by Mr Flanagan above and that just eight women who had been in dispute with the Department of Justice over the length of time they worked in a Magdalene laundry have so far received redress payments.

Mr Ó Fátharta also reported that Ms O’Toole had identified a total of 214 cases for review.