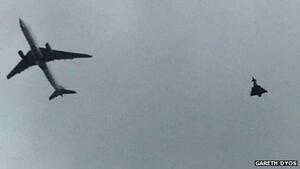 RAF Fighter Jet from RAF Coningsby escorts a Qatar Airways flight into Manchester this lunchtime after a bomb threat pic.twitter.com/5ep9lipi3r

A man pulled from the QR23 flight at Manchester Airport has been arrested on suspicion of making a hoax bomb threat, a spokesman for Greater Manchester Police said.