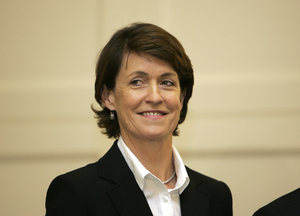 “Treason, as far as I’m concerned, what she has done amounts to treason to the Bar,” one senior counsel fumed to The Irish Times this week, speaking on condition of anonymity.

Barristers have felt under siege for some years now, but the impact of the personal injury guidelines has particularly contributed to division in the legal world about Ms Justice Irvine’s tenure in the State’s third most senior judicial position.

“Remote hearings have been expanded much more than necessary, depriving junior barristers of essential training opportunities, and judges should never have got involved in making guidelines which mean people will not get properly compensated for their injuries,” said the same barrister.

Up to a third of barristers may quit, believes a junior counsel: “I think Ms Justice Irvine was excellent at getting the courts up and running again after Covid but I would have liked to see her, as a barrister herself, being more sympathetic to the position of barristers,” she said.

“The personal injuries barristers can yearn for the halcyon days of the past all they want, those days are not coming back,” according to another barrister, whose area of practice does not include personal injuries. “There’s a whiff of misogyny about a lot of the criticism of Judge Irvine

The President of the High Court Ms Justice Mary Irvine is to stand down from the role later this year.

The judge informed her colleagues of her decision to retire during a meeting of High Court judges in the Four Courts on Friday morning. pic.twitter.com/NApM4Xz5om

The first woman to be appointed as president of the High Court, Ms Justice Irvine took up the role in June 2020.

Now aged 65, the judge has consistently said she intended to serve between two to three years in the role and those close to her are not surprised at her announcement on Friday to a meeting of her High Court colleagues of the departure in late July at the end of the next court term.

Speculation is already rife about who will succeed Ms Justice Irvine to the third most senior position within the judiciary.