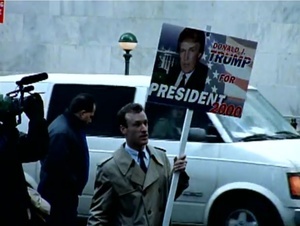 Predictive programming by the Machine?

Spotted this guy (top) @1.04 in Rage Against the Machine’s video for ‘Sleep Now in the Fire’, directed by Michael Moore in 1999.

The video was shot in public on Wall Street, so it’s not clear whether he’s a plant, or a randomer they caught on camera. Either way, remarkable bit of prescience…

Bodger must never see this.

Previously: Back to the future: how the Simpsons and others predicted President Trump (Guardian, November 10, 2016)