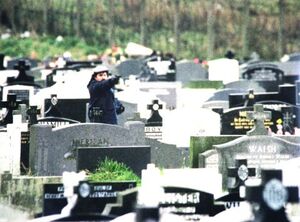 Further to the surprise release earlier this week of Michael Stone…..

A judge has ordered the disclosure of reasons why notorious loyalist killer Michael Stone was freed from prison.

Stone killed three people in a gun and grenade attack at Milltown Cemetery in west Belfast following an IRA funeral in 1988. Stone was freed under the Good Friday Agreement, but returned to prison six years later for trying to kill Gerry Adams and Martin McGuinness.

Stone had been serving a 30-year jail term.

His lawyer said his life would be in danger if details were made public so the summary document will be shared with legal representatives, but kept confidential on a temporary basis….