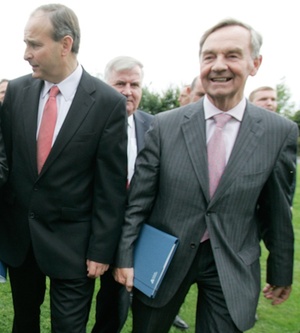 Micheál Martin and Michael Woods, who signed off on the indemnity deal with the religious, at a Fianna Fáil think-in in 2009

“There’s 15 around that table and that’s their job.” @PatLeahyIT #Redress – Breaking the Silence, Monday and Tuesday, 9.35pm pic.twitter.com/EI1ijJVzrk

“In retrospect in my view, that was, that was a mistake at the time.

I think there was that window. You’re talking about the last cabinet meeting [of that government]. This is something that has been negotiated. It’s in the best interests of everybody, bring it to closure and that’s how it got through.”

Micheál Martin, speaking on last night’s Redress: Breaking The Silence on RTÉ One

The June 2002 deal between Fianna Fáil and 18 religious orders, brokered by the late Michael Woods while serving as Minister for Education, awarded indemnity against all legal claims if the orders paid €128m in cash and property.

The agreement was made by Mr Woods, a devout Catholic, on behalf of Fianna Fáil, before the 2002 General Election and cabinet approval was never sought. It was also never run past the Attorney General of the day [Michael McDowell].

In March 2017, Sean O Rourke on RTÉ Radio One interviewed Mr Martin about the deal.

Seán O’Rourke: “Should the Government now, given what was revealed in Tuam, revisit the deal that was done in 2002 between the church and the then Fianna Fáil government?

You were part of it. There was the minister [for justice], Michael Woods giving the religious orders a €128million or 128million pound/punt indemnity. And, since then, the State has paid €1.5billion in restitution for the abuse. I’m not sure if the €128million, such as it was, has actually ever been delivered?”

Micheál Martín: “Well, first of all, there’s two elements of that. There’s the payments to victims of industrial schools at the time. And the redress board that was established – that would have had to be established irrespective of any deal with the church, Sean.

The church would never had been coming up with €1.5billion and the legal advice at the time, and I remember speaking to the late Rory Brady who was the Attorney General [Editor’s note: Mr Brady was appointed Attorney General after the indemnity deal was struck], he was adamant that the State would always, because of its involvement, from the inspectorial regime at the time in industrial schools – it was culpable.

Martin: “No I’m saying it was the most humane thing that could have been done in terms of the redress scheme…”

Redress: Breaking The Silence Part 2 on RTÉ One tonight at 9.35pm