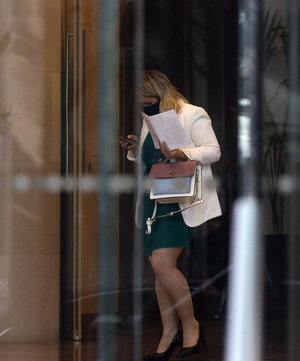 Minister for Justice Helen McEntee at the Convention Center, Dublin

The Taoiseach has told the Dáil that Minister for Justice Helen McEntee will take six months of paid maternity leave from April 30.

Minister McEntee will remain a member of the Government without portfolio.

Micheál Martin said that Minister McEntee will be provided with the necessary administrative supports to carry out any limited duties that may arise.

Minister for Social Protection Heather Humphreys will be assigned responsibility for the Department of Justice from 1 May to 31 October, in addition to her current portfolio. 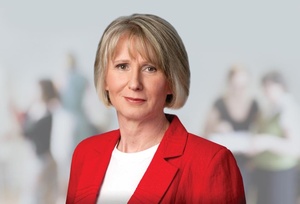 A letter signed by several Labour TDs and Senators appeared in last Saturday’s Irish Times calling for a greater debate on Garda accountability and oversight, claiming the current system is not working.

It also expressed the politicians’ concerns about how Garda Commissioner Martin Callinan is only held to account by Minister for Justice Alan Shatter in ‘private’.

Further to the publication of the letter, Senator O’Keeffe spoke to Colm Ó Mongáin on RTÉ Radio One’s This Week yesterday afternoon

During their conversation Mr Ó Mongáin reminded Ms O’Keeffe that several weeks ago, before the Government announced Sean Guerin, SC, would be carrying out an investigation into the allegations made by Garda whistleblowers Sgt Maurice McCabe and John Wilson, she told RTÉ News at One that she didn’t believe there was a need for a public inquiry.

Colm Ó Mongáin: “What has happened over the recent past that has made you now very concerned about this level of privacy that exists in the interaction between the Garda Commissioner and the Minister for Justice that you weren’t concerned about prior to the blow-up of recent issues over the whistleblowers and GSOC?”

Susan O’Keeffe: “Well, certainly, for myself, as part of, one of the signatories of this letter, I didn’t suddenly get out of bed last Thursday and say, you know, this has really exploded. It has really been a cumulative effect of watching and seeing all manner of events occurring and I think I’ve been saying from the start that oversight needed to be stronger, in particular in relation to the Garda Commissioner’s office and I accept that, and I’ve always believed that. I didn’t have, certainly, a blow-up moment, and I’m not aware that my colleagues did either when we talked about putting this letter in or talked about bringing our, you know, the members of the Justice Committee and the Oversight Committee together to do this. We did not come in and have a blow-up moment. I think it is, for me certainly, watching the debate going on now over a number of weeks about accountability and about the Garda Commissioner, about the Minister for Justice, about the closeness between all of these, yes I do believe that we do need to give greater independence to the oversight commission.”

O’Keeffe: “Well I don’t have, well I mean I have any number of questions, if you like, through the Oversight Committee relating to GSOC and the whole bugging affair but that’s a different matter. What we’re talking here about, is saying that the Garda Commissioner’s office needs to be under the, if you like, the scrutiny of an Ombudsman Commission or, you know, in the future. As it stands at the moment, any Garda Commissioner is exempt from that and that strikes me as allowing, therefore, a relationship between any Minister for Justice and any Ombudsman Commission to be too close. If they are the only way in which they can, the Garda Commissioner can report is back to the Minister for Justice that then allows it to be too close. And I, personally, don’t think that’s healthy for any situation and I think that in the future, in terms of strengthening the Garda Ombudsman’s office and looking really at better oversight across the police, that’s what I’m interested in, that’s why I signed this letter cause that’s what I want to see.”