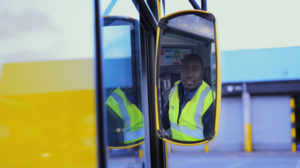 “Some weeks it can happen that every day of the week you will get racially abused.”

The short film was one of six shortlisted for the 2015 ICCL Human Rights Film Awards in the Light House Cinema in Dublin last night.

At the same event, it won a Special Jury Prize – for casting a light on the widespread and underreported problem of racism in Ireland.

Misan came to Ireland in 2001 when he was 16. He has been working as a Dublin Bus driver for nine years.

Read about and watch the six shortlisted films in full here