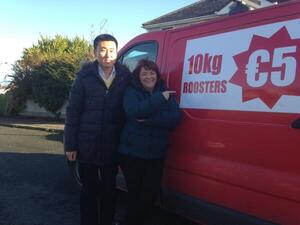 He’s selling potatoes like ice cream to the Irish.

But who is Chris Lee, the musical potato van man?

So I take Lisa to Skerries and after we spent two hours on the beach, I brought her to a restaurant – that day was Skerries Music Festival and people were very, very nice and said oh you are foreigner, maybe you stay here and listen to the the music. So we thought Skerries is so nice why not stay and open a business here? And Lisa started looking for premises and finally we found this location here [Fresh Kitchen in Skerries] – and both of us were happy about the location.

“I thought now that it’s getting cold, people need more spuds. Then the ice-cream man came in with the music – and I think that’s a good idea – and it brings people’s attention.

“So I decide I’ll get the music horn from Ebay, then I put twenty or thirty bags of potatoes in my van and I open the door and people hear the music and people can see ah, that guy is – the spuds – then I think that’s not enough. So I pay money to get big posters to stick on my van and people can see that I am selling potatoes. They can listen while I play music, that’s how it works.”