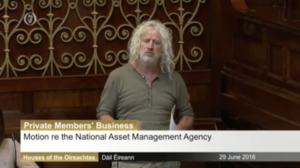 The C&AG report into Nama’s sale of it’s northern Ireland property portfolio, known as Project Eagle, to US investment firm Cerberus, is expected to be published.

A look-back at what some politicians said in the Dáil on June 29, 2016 during a debate on a motion put forward by Independents 4 Change TD Mick Wallace, in which he called for a Commission of Investigation into the Project Eagle sale (above):

The NAMA Act rightly established a high degree of public accountability for NAMA and established an independent board to implement NAMA’s commercial mandate.

Indeed, a number of NAMA board members first appointed in late 2009, including the chairman and CEO, continue to progress diligently NAMA’s commercial mandate to this day.

In addition, long-serving members of the House will recall that the then Minister, Mr. Brian Lenihan, agreed to the establishment of NAMA’s Northern Ireland advisory committee under section 33 of the NAMA Act following discussions with his counterpart in Northern Ireland, Mr. Sammy Wilson.

The board of NAMA appointed a person from Northern Ireland to the advisory committee who had been recommended by Mr. Wilson to Mr. Lenihan.

It should be remembered, however, that the Northern Ireland advisory committee had no decision-making powers and no access to confidential information.

Deputy Clare Daly has a peculiar attitude to commissions of investigation, seeing them as trawling instruments which may come up with something after which proceedings would follow.

I remember reading “Alice’s Adventures in Wonderland” and it was either the Mad Hatter or the Dormouse who said “Verdict first, trial afterwards”.

That is the sort of due process being advocated in the House by people who make allegations under privilege which they do not substantiate or make in public without the cloak of privilege to protect them.

… taking into account the investigations that are under way, it is my view that there is no specific line of inquiry that could be usefully pursued by a commission of investigation.

It is unwise to launch a costly commission of investigation on claims that are under investigation by the appropriate authorities.

“Fianna Fáil has been consistent in asking that all aspects of the Project Eagle sale be thoroughly examined and investigated”.

“Last October, I moved a motion, on behalf of Fianna Fáil, calling for a Commission of Investigation under the terms of the 2004 Act. We called for this on the basis that the allegations were of such a serious nature, the public would demand nothing less than a comprehensive inquiry which would get to the truth and be able to make clear findings in relation to any wrongdoing on the part of individuals…”

“…In its evidence before the committee of public accounts, and in its public commentary on Project Eagle, Nama has argued consistently that no issue has arisen regarding the sale side of this transaction but, as I said last October, that is not an adequate answer.”

“Ultimately, the decision to proceed with the sale of Project Eagle was made by Nama in Dublin and Nama must account for the entirety of that transaction.”

“I understand Mr John Miskelly began legal proceedings over the deal against Cerberus and Anglo Irish Bank on 21 June in the Belfast High Court.”

“Members will recall that Mr Miskelly appeared in the BBC “Spotlight” programme which brought some of the details of this case to light. He is alleging the Project Eagle process was fraudulent from the start.”

“It is high time that the Minister for Finance made a full statement on all of these matters and I am disappointed he did not take the opportunity to do so today.”

“The National Asset Management Agency has been handling billions of euro of the people’s money and it should be accountable.”

“The Fianna Fáil Party agreed with our position on this matter. In October, the party’s finance spokesperson, Deputy Michael McGrath, stated: “There is simply no room whatsoever for any question marks when we talk about the sale of a State asset with a face value of over €5 billion”.”

“He went on to say: “It is also essential for the integrity of the House that a commission of investigation is established to find out the truth about the entirety of Project Eagle”. What has changed?”

“Just two weeks ago, the Fianna Fáil leader, Deputy Micheál Martin, described the Government’s position on Project Eagle as untenable, yet despite a number of requests directly from me, his party will not now support the establishment of an investigation.”

“The reason it gives for its position on this issue is entirely spurious and can only be explained by a desire to keep the Fine Gael Party in power.”

Fianna Fáil’s latest attempt at two-faced politics is utterly transparent and typical of its approach to politics.

Literally 15 days ago, Deputy Micheál Martin stood up in the Chamber and said that the Government’s position on the sale of Project Eagle by NAMA was becoming more untenable by the day.

He said that the sales process, whether we liked it and whether NAMA liked it, was not robust or competitive and did not secure the best outcome. He went on to say there were major ethical questions over the entire sale of the asset.

He asked whether it ever occurred to the Taoiseach that we should set up a commission of investigation given that the UK National Crime Agency, the US Securities and Exchange Commission and others were pursuing it.

However, when push comes to shove, Fianna Fáil retreats into the establishment. It is afraid to look into issues but happy to look angry about them for a few cheap headlines.

Deputy Michael McGrath referred to how we had to ensure the criminal investigation was not affected. That is a great line from the spin doctors of Fianna Fáil.

The line is that we now have criminal investigations and that a commission of investigation is not warranted but Fianna Fáil is not doing a U-turn.

The reason none of that adds up is the UK National Crime Agency, the agency conducting the criminal investigation, announced in a press release to the world on 9 July 2015 that after receiving requests from the Police Service of Northern Ireland it was instigating a criminal investigation into the issues surrounding the sale of Project Eagle. That was on 9 July 2015.