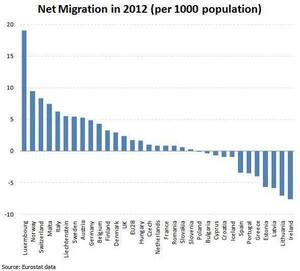 A new graph showing net migration for countries across Europe, from the We’re Not Leaving group.

“Between 2008 and 2013, there was, according to Eurostat, with some extrapolation based on CSO:
A population decline of 207,900 in the age cohort of 15-29 years; in this same period, 281,800 in this age group emigrated; if we assume that 48.3 percent of this emigration was recession-related, then the recession-related emigration figure is 136,100.”

“So nearly two-thirds (65.5 percent) of the decline in the key age cohort is due to recession-related emigration.” 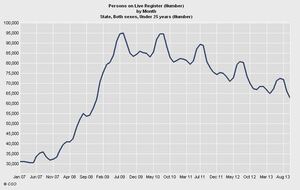 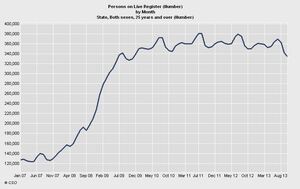 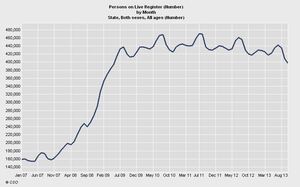 These graphs show the number of people of both sexes on the Live Register in the State aged under 25, over 25 and all ages between January 2007 and October 2013, (courtesy of the Central Statistics Office).

It shows that, out of all the age groups, since 2011, the 15-24 age group has seen the worst net migration figures.

Proof if it were needed.

You can see details for YOUR own social welfare office here.

Previously: U25s With Jobs Fallen By 60%