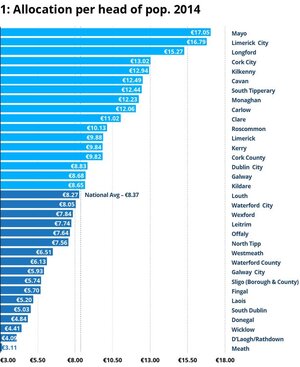 The fruits of a RTÉ Investigation Unit probe of the allocation of housing funds.

It’s based on a scientific method.

In 2010 under Fianna Fail, Mayo and Limerick City managed to get €4.2 million of the €79 million funding available, around 5.3% of the total.

However since the change of government Mayo and Limerick’s share of the pot has grown by 57%. Last year the two constituencies – home to Taoiseach Enda Kenny, Finance Minister Michael Noonan and the then Housing Minister Jan O’Sullivan – together received 8.3% of the total fund….

…If the money had been allocated strictly on the basis of population, the allocation should have been the equivalent of around €8.37 per head.

That is not what occurred last year however. Instead, Minister Jan O’Sullivan’s own constituency of Limerick City – also home to Finance Minister Michael Noonan – got €16.79 per person, the second highest rate in the country. Only one local authority area was higher, and that was Mayo, Taoiseach Enda Kenny’s home county, where funding per person was €17.05.….