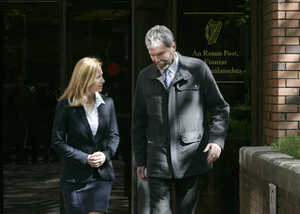 Victims of Garda corruption to meet leading Unionist politicians in Stormont on Thursday.

John Wilson and I will be visiting Stormont next week with a delegation of families who have been victims of Garda wrongdoing. — Gemma O’Doherty (@gemmaod1) November 5, 2014 From top: Gemma O’Doherty, her reporting on the Fr Niall Molloy case and Veronica Guerin’s report on the missing file on October 9, 1994.

Her articles directly lead to the gardaí reopening the case in 2010.

With the recent decision by the DPP not to pursue the case further we share an interview Gemma gave Audrey Carville on RTÉ’s Drivetime first broadcast on August 22 that you may have missed..

Audrey Carville: “Fr Niall Molloy was killed at a house, owned by friends, and business acquaintances in Co. Offaly, in July 1985. An inquest found that he had been badly beaten and died as a result of his injuries, but no-one has ever been jailed for his killing. This week following an investigation by the Garda Serious Crime Review team, the Director of Public Prosecutions decided not to prosecute anyone for Fr Molloy’s death. His family today reiterated it’s call for an independent inquiry into the killing. Well, I’ve been speaking to journalist Gemma O’Doherty who began by reminding me of the events of that night, following a wedding party at the home of Richard and Theresa Flynn in Clara.”

Gemma O’Doherty: “On the day of the wedding in July 1985, we know that Fr Molloy, who was a very close friend of Theresa and Richard Flynn, he kept horses on their land. We know that he was deeply upset about certain things that were happening in the relationship and we know that he had requested a large sum of money that was owed to him and he was deeply disturbed that this money was not being returned to him. Fr Niall was a wealthy man and he had a love of horses but I believe his vocation came first and I know that he was a very good priest to his people up in Roscommon. We know that the following day, after the wedding, that there was a big party in the house and that there were influential people present. And we know that Fr Niall then went to the house. What we also know that happened, in certain hours, in the late evening or into the early morning is that Fr Niall was brutally beaten to death. We know that he sustained at least five injuries to his head, and many, many more to his body. And we also know definitively that he was left to die, for up to six hours. The histology of his brain proved that conclusively. And then, what happened after that is perhaps the most disturbing aspect of all of this. We know that the Garda investigation that took place was shambolic. Many, many people with vital evidence were never interviewed. I have been working on this case for three years now and I know that there are at least five institutions of the State that have very serious questions to answer.”

Carville: “The owner of the house, Richard Flynn, he stood trial for manslaughter.”

O’Doherty: “Correct, he did indeed. And he suggested that there had been a row over drink and that they had been having drinks and that it was all a terrible accident. Now the injuries to Fr Molloy do not suggest that this was an accident.”

Carville: “Mr Justice Frank Roe. He brought that trial to a fairly sudden halt after a few hours?”

O’Doherty: “He did. I mean it is considered to be one of the most astonishing trials in Irish criminal history. He directed the jury to acquit the defendant. Now the defendant was the wrong man. But thanks to the incredible campaigning journalism of my murdered colleague Veronica Guerin, we later found out that the Molloy file was stolen by Martin Cahill in 1987, from the DPP’s office. Now, Martin Cahill, ‘The General’ knew that that file, the contents of it would be embarrassing to the authorities and he wanted to get something on the authorities. And, among those contents, were letters written by Justice Frank Roe, one of them in advance of the trial, stating that he knew the parties involved. Now, based on that he should not have been allowed to hear that trial but he did. I have interviewed two of his former colleagues on the bench and they have both said to me that he should not have been involved in the case. Now the man is not here today so unfortunately these questions cannot be put to him.”

Carville: “And Mr Justice Roe died. He passed away in 2003. There was a new investigation then, Gemma, ordered and began in late 2010. What was the basis for that?”

O’Doherty: “Well, earlier in 2010, a very brave individual, a hero and a patriot, came to me, a man from Clara and he said ‘I would like you to look at this case’. But thanks to the information that that individual gave me, it sent me on a long journey, up and down the country. On foot of what I discovered, much of which I was not in a position, we were not in the Irish Independent able to publish a lot of it. But I felt it had to be handed over to the guards. Much of the evidence that I handed over to the guards showed that the original investigation was profoundly flawed. We know that evidence was contaminated, we know that witness statements were not carried out in a way that was appropriate. And I really did hope that, as more importantly the family did, and the Irish public that there would be truth, justice and accountability in this. That was three years ago. And we now have this decision from the DPP that no charges will be brought. Now, both the family and myself and people in Clara and Roscommon, we are very happy that the Garda Síochána are out of this case because we cannot have a situation in this country where Gardaí are investigating Gardaí.”

Carville: “And this is an issue because you mentioned ‘The General’ Martin Cahill. There are reports, it has been reported in the past that the Gardaí did a deal with Martin Cahill and another criminal, John Traynor, in exchange for that file on Fr Molloy.”

O’Doherty: “Correct. The State authorities were so desperate to get this file back that they did a deal with Martin Cahill and dropped charges against his associate John Traynor, one of the most wanted criminals in this State.The file was returned, the family were informed of that.”

Carville: “And have the Gardaí ever responded to those allegations.”

O’Doherty: “No, I mean I, and other media, and the family have been asking Martin Callinan for almost two years to please explain this Garda deal which Paul Williams has written about, Veronica Guerin wrote about. It is in the public domain and has been so, for many, many years. But the Garda Síochána fail to inform the public, which is their duty about the detail of this deal and why the State was so desperate to get the Fr Molloy file back.”

Carville: “The investigation which began in late 2010 and has just ended. What did that investigation focus on? Did it uncover anything?”

O’Doherty: “I mean really most of the evidence that was given to the Gardaí was based on the investigation that I had done and I had given them dozens and dozens of names, many of them people who had never been interviewed and really wanted the truth to come out. Now the family are being told by the Gardaí that some people were not willing to speak. But I’m afraid in Clara and Roscommon, and it would be my opinion too, that we feel that the right questions weren’t asked of these people. The reality is, Audrey, that the dogs in the street, and I hate to use that awful cliché know what happened. We know the truth. Many people know the truth. In the Midlands, people know the truth about this case. So you could argue we do have truth but we don’t have accountability and nobody has been held accountable for this. And the question is why? Thanks to the brilliant work of Roscommon Senator John Kelly this has been described by him, in the Senate, as ‘the biggest cover-up in the history of the State’. You know, the institutions of the State need to be held accountable and Minister Alan Shatter, who promised me in Leinster House nearly three years ago that he, in Government, would deal with this case. He now has to keep his pledge to the Molloy family and to the Irish public so that the Irish public can have faith in the criminal justice system.”

O’Doherty: “Well somebody, somebody whose opinion I greatly respect said recently that ‘hell will freeze over before accountability happens in the Fr Molloy case’. And while hell may freeze over there is an awful lot of hate, and pressure coming on the authorities now because this is not the only case where the Gardaí have been accused of not doing their job. I am very unhappy with the Cold Case Unit and, more importantly, the family of this wonderful man are deeply unhappy with the Garda Síochána.”

Carville: “That was journalist Gemma O’Doherty talking to me earlier this evening about the killing of Fr Niall Molloy in 1985. Well we contacted An Garda Síochána with a number of questions about this case. We asked them would they be making any comment on the decision by the DPP not to pursue prosecutions, we also asked them why their three-year investigation into Fr Molloy’s death yielded nothing and why was a deal done by An Garda Síochána whereby charges were dropped against criminal John Traynor, in return for the file on Fr Molloy. We received this statement from the Gardaí in response. They said: ‘The death of Fr Molloy has been fully investigated, a file was prepared and submitted to the Director of Public Prosecutions and a direction given. An Garda Síochána have no further comment to make’.”