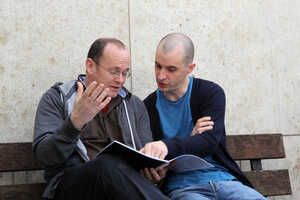 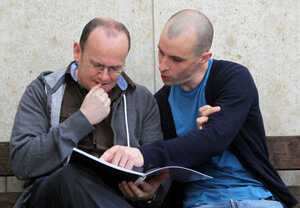 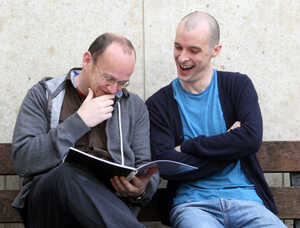 Director Mark O Rowe and Love/Hate’s ‘Nidge’ actor Tom Vaughan-Lawlor hold a photoshoot to promote O’Rowe’s Howie The Rookie, in which Tom will play both Howie and Rookie.

It will open at the Project Arts Centre, Dublin on June 17, before heading to various venues across Ireland and the UK.

“Howie tells a story. Then Rookie takes it up. Mark O’Rowe’s electrifying, epic tale is a wild, urban odyssey through a nightmare landscape, hilarious and grotesque by turns.

“Meet the enormous Avalanche, monstrous on the bar stool in her white skipants. Meet Ladyboy, a dangerous gangland thug with Siamese fighting fish and – it is rumored – three sets of teeth. Meet Mouse, Howie’s younger brother. Meet the Howie. Meet the Rookie.”