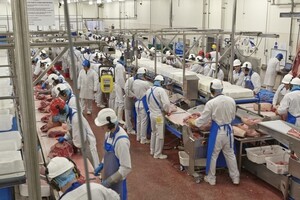 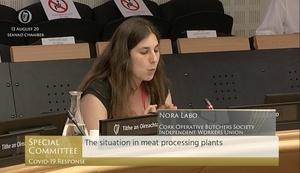 The Special Committee on Covid-19 Response

Before today’s debate on on the situation in meat processing plants, Nora Labo (above), Romanian Organiser of The Cork Operative Butchers Society branch of the Independent Workers Union.

“The Cork Operative Butchers Society branch of the Independent Workers Union has been supporting workers in meat plants and in the meat industry for a long time and has been in daily contact with workers of different nationalities employed in several meat plants around Munster for the duration of the pandemic thus far.

As the workforce in this industry is largely foreign, with limited English fluency, I emphasise that our union, even though it is small, has had privileged access to these workers’ experiences, as our team includes Polish and Romanian-speaking organisers, and the union constantly strives to provide translation for any other language which is necessary for organising this diverse workforce.

I personally have been in contact with Romanian workers in several plants each day since the beginning of the pandemic.

This union believes there is no intrinsic reason why working in a meat plant should be more conducive to contracting Covid-19 than working in any other environment.

We are convinced that the reason Ireland has witnessed so many worrying outbreaks in meat plants in the past months is due to the workers’ substandard employment and living conditions which are the result of the industry’s long-term disregard for the well-being of its staff.

These problems are aggravated by the unscrupulous practices of the work placement agencies through which many of the workers in this sector are employed.

Based on our membership a high percentage, perhaps 40% or 50% – we do not know – of these workers are employed through agencies.

I would like the committee to bear in mind that, in our view, these Covid-19 outbreaks are simply the most visible consequence of chronic issues that should be of great concern in their own right.

First, there is the question of overcrowded accommodation. Many meat plants are in rural areas where there is a shortage of suitable accommodation to begin with.

As most meat workers are paid the minimum wage, often with no overtime premium, their tight budgets force them into seeking shared accommodation, sometimes even with several families in the same house.

At the same time, being foreign and with a limited command of English is a real disadvantage in independently securing accommodation. Many workers we know are being housed by their employment agencies which, seeking to maximise profit from the accommodation they provide to their employees, crowd as many people as possible into each house they let.

This reckless behaviour on the agencies’ part also led to people being moved from one shared house to another during the height of the pandemic in an effort to keep each house full so as not to lose income. Our union has documented several such cases.

The workers housed by the employment agencies never get a proper contract for their paid accommodation, even after several years of living in the same place, so they can be moved around or evicted without notice, both of which have happened since March to workers we know.

It is obvious that this dismal housing situation favours the spread of Covid-19 among workers and, despite relating to conditions outside of work, is a result of low pay and dependency on the employer for accommodation.

Second, most workers need to provide their own transportation to get to work. As I said earlier, many meat plants are in quite remote areas and the employers make no effort to provide any transport. There is no public transport available.

On a tight budget, the workers car pool and they fill the cars to capacity. This has continued throughout the pandemic as most employers make no effort to facilitate the safe and socially distant transport option, either through a company bus or with financial assistance for private transportation, both of which would have been possible, while perfectly aware of how their staff get to work every day.

Third, many workers in this sector do not benefit from a sick-pay scheme with their employer and this is especially the case with all the agency workers we know. This means that these workers, while already on very low pay, know that when they are ill they will not be able to earn any money at all.

Of course, this logically leads to some workers being less cautious than they should ideally be after noticing early symptoms of what might or might not be a worrying condition.

We also know that many workers, after years in Ireland, do not have a GP, which can be seen as an indirect consequence of extremely difficult working conditions.

When working on minimum wage, one has to work excessive hours, often more than 50 hours a week, to get by. This limits the time available to find a doctor and the time to learn the basics of English to communicate with a medical professional. One has to pay for the doctor and often also for the translator when visiting the doctor.

A special case of this lack of access to healthcare, but of great importance, is that of a great number of workers, all Romanian, who were for years cheated out of their social security rights in Ireland by the employment agency which was hiring them to work in several meat plants in Munster.

This agency employed all these Romanian nationals as self-employed contractors declared in Poland, so all the workers’ contributions were sent to the Polish and not the Irish Revenue.

I emphasise it is our union that has uncovered hundreds of such cases and we have filed hundreds of complaints to the Workplace Relations Commission.

For many years, all of these workers have had no annual leave, no right to illness benefit, no rights to child allowance, had no PPS numbers, and were de facto invisible in Ireland.

While some of these workers were self-isolating on suspicion of Covid-19 in March, they had no access to a doctor, no GPs would take them and their agency tried to force them to apply for unemployment benefit instead of the Covid-19 illness benefit, taking advantage of the fact that the workers had no GPs and no English.

When these workers have no legal existence in Ireland for years they are also not entitled to illness benefit and they are extremely vulnerable. Based on these observations I will emphasise one last point.

For example, if Perspex screens are introduced and we do not take into consideration that the workers then must lift heavy crates above the Perspex screens, then their workload is greatly increased and, while the pace of their work has never slowed during the pandemic, such measures will not work.

The workers’ well-being, their workload, their mental health, their income and social and economic conditions have to be taken into account if we want to contain this disease.

We recommend unannounced inspections. However, we also recommend democratically elected workers’ health and safety committees in each factory and these should be consulted on any measures.

Thorough investigations should take place in all meat plants to see how workers’ contracts operate and how their accommodation is provided for by their employers.”

Earlier: A Lot To Process

No surprise whatsoever that nothing said by Nora Labo at the Covid19 committee hearing today was reported by RTE on its News at One. The same RTE which failed to report the recent Europol report on horsemeat seized from Irish meat plants. https://t.co/iTRX7f03xm pic.twitter.com/VVQP4EAlWp

On the production rate…

“Production never slowed down. I have sources in killing, dispatch, packing, boning and all other parts of the meat plant. The volume processed in every meat plant that we are in contact with has increased even though there have been fewer workers. The companies could not source foreign workers at the height of lockdown and, when some workers got ill, others would just have to do more work.”

On instructions regarding PPE…

“In many meat plants, for instance, we know workers employed through agencies received a text message or email from their agency – very brief and often only in English – about the PPE they were going receive. Often, they came with no instructions in their own language as to whether the face mask was reusable, single use or essential information like this.

“Sometimes workers called me with a photo of the mask and asked me to tell them how to use it, could it be re-used or how long it was good for because no such instructions had been given by the employing agencies. In terms of translation and everything else it has been dismal. For some communities that have been in Ireland for longer, like the Polish community, perhaps the factories have some available translation or supervisors who are already from that background and speak the language.

“For some other recent arrivals, such as many Chinese workers in Munster, for example, there is little support. It is the same for Brazilians, East Timorese or other communities.”

On working while sick…

“We know of a situation in a food production plant, which is not a meat plant but a dairy one in west Cork, where during lockdown around May, some workers had very obvious symptoms and were not purposely trying to hide them but wanted to stay home. The employers, however, insisted that these workers continue coming into work.

“There was a significant walkout of all the factory employees on that shift in order to protest as to their own lack of safety…It is often not the workers who would willingly dissimulate their symptoms but is more likely the shift supervisors.”