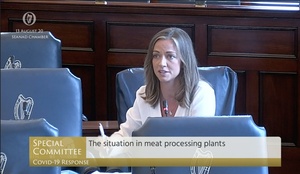 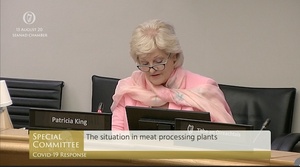 Social Democrat TD Holly Cairns asked Patricia King, General Secretary of the Irish Congress of Trade Unions (ICTU) why it took a pandemic and workers to become infected with Covid-19 for the conditions in which meat plant workers live and work to be revealed.

She asked if the unions were aware of the conditions before Covid-19.

“There are a number of reasons for it. Firstly, affiliated unions of Congress, but particularly SIPTU, have represented workers in meat plants for decades, that’s number one.

But in some cases you will have a collective agreement under the terms and conditions but it’s not the norm and it’s not by any means the majority so we have argued strongly, for instance,

I sit on the Low Pay Commission , I’ve taken part in the public consultations where we’ve had exposure to workers coming in just from the street and offering public consultation their view as to what’s happening in their environment and in meat factories aswell. So we would be well aware but there is a very large body of opposition to having workers having any voice.

And there is a reason for that.

Because if you have a production pace at the level that they have that’s where the focus of those employers is and that production pace, I mean if you look at the top ten companies operating in this sector, you’re talking about the top one of having a turnover of €2.3billion in 2019 and the second one €2.2billion.

So you’re talking about big money to be made.

That is the model.

And they’re not going to, they’re going to resist any infiltration by us in, to have discussions. And then they’re backed up by a law, or by the lack of legislation in this country which says, actually, if those workers want to make their voice heard collectively, there’s no law that says they can do that.

But we still haven’t succeeded in getting it across the value of having a balance in terms of this employer-worker relationship and that’s what we’re seeing. It takes a pandemic to demonstrate the fallout of this. But that, it has been around a long time.”

Deputy Cairns then asked Ms King to clarify that the unions did know about the conditions before Covid-19 “but the power of the beef lobby was too big to make those voices heard?”

Boom! Representative from Independent Workers Union confirms at Dail Covid19 committee it is the employment agencies which provide accommodation to workers in meat plants. https://t.co/DBLn6EgQoP

There Is No Cure

I’m Looking For A Partner In Crime