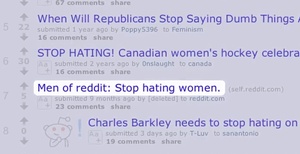 The latest mini-documentary from Off Book, the PBS web arts series, explores the highs (diversity, community) and lows (rampant misogyny) of Reddit culture, with contributions from – among others – Reddit  co-founder Alexis Ohanian.

Since its creation in 2005, Reddit has grown into one of the most influential communities on the internet. More than just a content aggregator, it generates information and new content, and has given birth to intriguing collaborative projects that reflect a particular group character and value system. The Reddit community has become so active that it has had an impact on recent political events like SOPA/CISPA. And like any real-world community, it also has its share of internal social issues, forcing it to grapple with its commitment to free speech and the lawlessness of the internet.