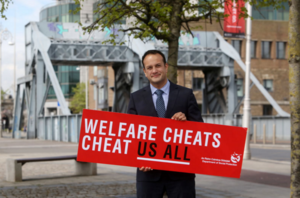 You may recall how Minister for Social Protection Leo Varadkar launched his €200,845 Welfare Cheats Cheat Us All campaign last month.

In the relation to the launch, at the time, the Irish Independent reported:

“There are quite a few out there,” he said. The facial recognition software can identify ‘double people’ out there. “Even people putting on make-up and beards and stuff. None of that works because it’s all based on bone structure.”

The Department of Social Protection has identified just one suspected case of identity fraud this year, it has emerged.

The department said in response to a parliamentary question that 134 suspected cases had been identified between 2014 and April this year, with 21 successful prosecutions so far, and 18 people receiving custodial sentences.