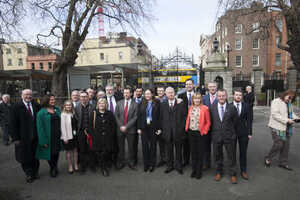 Further to the yesterday’s post about media bias during General Election 2016.

Having read your article on #VinB with Mick Clifford on media coverage through #GE16 here is a discussion from The Pat Kenny Show last Friday morning on Newstalk. It annoyed me so much I transcribed it (as below) and lodged a complaint about it.

Pat Kenny: “Just, a by the way, in terms of Sinn Féin, because they are largely irrelevant to this discussion because they are not going to go into coalition with Fianna Fáil or with Fine Gael. What do you think did for their prospects, I mean they’ve improved their number of seats but at 13 whatever it was, point eight per cent was it, or something certainly less than 14%. It was not up to their expectations. I mean was it? They had no ambition really on the USC which would put money back in people’s pockets or was it the Special Criminal Court or?”

Averil Power: “I think it was two words Gerry Adams… was their leader.”

Paddy Duffy: “Yeah, I think it was the faulty arithmetic of Gerry Adams (A), and (B), no middle sector worker or higher is ever going to let Sinn Féin get near their pay packet, okay. Because they don’t believe in that crazy economics that they have, okay, and then all the other attendant things, Mairia Cahill and all of that sort of stuff and the sort of, the, the stronghold that the Central Committee has on the party as a whole, particularly the women who were quite obviously ill at ease during many of those days, and their Deputy Leader in particular”

Pat Kenny: “Micheál Martin has always been pushing the line that Sinn Féin, Dublin, is controlled by Belfast, is that…”

Duffy: “Well, obviously I don’t personally know, so, this is what people think…”

John Drennan: “It certainly was, it was certainly a strong image was were you letting the Army Council into the cabinet rooms of the State via the back door, if you voted for Sinn Féin? I think another thing to possibly bear in mind is that, was it Ruairí Quinn had a very interesting piece during the middle of the campaign, in the Irish Times on Saturday, where he talked about Labour not really being a party of working class people, and that…”

Duffy: “I agree with that.”

Drennan: “…the East Germany economy that Gerry Adams presides over whilst he flies over in airplanes to get his teeth done in America. They do not…they are not a party with which the working class identify with. And I think they were very much squeezed in this election too, by the multitiude of options that were, such as Averil herself in Dublin Bay North, that was competition to Sinn Féin that they would not have expected and would not have wanted.”

Kenny: “But as part of their overall project they have improved their number of seats. They are obviously hoping that Fianna Fáil and Fine Gael will go into one massive coalition which will allow them to be the largest party on the Opposition benches, not necessarily the loudest voices because you’ll have your Mick Wallaces and you’ll have all those other people who have made the running in the last Dáil.”

Duffy: “Yes, and the party has quite a quota now Pat, of intellectual young things who are very bright, very sharp, very good, very well trained communication-wise. But it’s the gospel they preach is wrong. The performance is fantastic.”

Kenny: “In Dun Laoghaire, when we had our debate in Dun Laoghaire the young Sinn Féin candidate, and I was talking about Gerry Adams being perhaps a liability, a political liability, and I didn’t want to go through the list of charges for fear I would be accused of actually… you know…labelling him and he said to me “well, what are you talking about?”. So then I had to begin, reluctantly…”

Kenny: “….but he said “I am a child of the Peace Process”. You know he doesn’t have any memory, he could read about it in the history books but it’s not in his DNA.”

Duffy: “And we have to give them credit, I mean we give them tremendous credit. Gerry Adams, [Martin] McGuinness and all that team and all around them for having brought us from that horrible fratricidal war to where we are – that’s to their greatest credit. Simply we don’t believe any of their economic policies.”

Drennan: “They got us into it in the first place.”

Power: “It’s not the legacy of the Troubles that’s holding them back it’s their modern day attitudes on certain issues like the Special Criminal Court. You know I’ve a constituency that includes Coolock and other areas that have been blighted by gangland crime.”

Power: “And, and people simply don’t understand Sinn Féin’s attitude on the Special Criminal Court. The notion that you would expect ordinary people to serve on a jury who would go up against these kind of gangsters without protection, people just can’t…”

Kenny: “About half of their own supporters disagree with their policy to abolish the Special Criminal Court and another interesting statistic in one of their polls was that… I think it was  40% of their people didn’t trust them on running the economy…of the people that are going to vote for them…”

Duffy: “That doesn’t surprise me…”

Kenny: “Anyway I want to read you some of the texts…”

Listen back in full here (part 3).