“I’m a nurse. I’d briefly like the chance to explain why pay restoration is so vital for us. It’s not a pay increase that we are looking for and in my opinion deserve. We are just simply looking to have our pay restored.

I like thousands of others went to college for four years and got my nursing degree. I finally had the career I dreamed of.

I got married to a tradesman. We got a mortgage for a three bedroomed house and we had two children.

We could pay for our mortgage. We had one family holiday a year. We had two cars. Neither of us had new cars but the cars we bought got us to our jobs and back home again.

We lived a normal life. Nothing fancy. But we got by.

Then the banks and the government decided to gamble with our lives.

My husband lost his job in the crash.

And I was forced to take on all the bills including the mortgage.

It was tough but I did ok for the first few months. We sold my husbands car for €3000. We tightened our belts.

Then the government decided to punish us even further for their mistakes. They introduced USC. Again we tightened our belts even further. My husband was getting the odd job here and there but his weekly wage was gone. We were struggling to get by.

Gone was the yearly holiday. Gone were the day trips away. Gone was the monthly night out for the two of us. We were finding ourselves becoming isolated from society because we couldn’t afford to be part of it any longer.

My husband was falling into a deep depression. He couldn’t get over the fact that he felt like he had let me and the kids down. He hadn’t of course but that’s what he felt.

As if that wasn’t enough punishment the government decided that because I’m a nurse I must pay PRD [Pension-related Deduction] . A tax that was only to be introduced as an emergency tax but for some reason we are still being forced to pay.

When they introduced PRD, that was the end of anything that half resembled a normal life for us. We were already at rock bottom but that destroyed us.

Santa suddenly hadn’t got a lot of money. Toys were second hand from charity shops. Food was bargain basement end of life food. And our mortgage? I just can’t pay it any longer.

I try to pay some money off it but the money that I used to pay for the mortgage is now going to pay USC and PRD. Anything I have left is going on paying for heating, electricity and the kids food and schooling. Our heating is one fire in the sitting room and hot water bottles and that’s it.

And now the banks have decided that they’re going to take our home. They’re going to leave us homeless. I’ve tried to talk to them but they don’t want to know.

I’ve tried to come to a deal with them to pay off as much as I can but it isn’t good enough. They are completely heartless. They want the house.

We are now going through the repossession courts desperately trying to save the last thing we have left, our little family home.

I eat a bowl of porridge before work to fill me up and look forward to beans on toast at 10pm at night when I get home. Sometimes I’ll break out and buy a banana to eat on a break but that would be very rare.

I’m used to being verbally and physically abused in my job. I’ll never get used to the ward being constantly short staffed and always overcrowded though.

Every working day is a nightmare but it’s not as tough as constantly going hungry everyday and coming home to see my husband a shadow of his former self.

The man I love so much who is a proud hardworking man I now believe is on the verge of talking his own life because of the cruelty of this government.

We were once just a normal couple going about our simple lives and now we are a very broken couple who are desperately trying to save the last thing we have left, the roof over our heads.

And so you see the €1000 pay restoration that I’m due in September 2017 that they are making a big song and dance about is buttons compared to what they have taken from me. That €1000 will amount to no more than €50 per month and I’ll have to wait almost another year for it.

Yet here I am hemorrhaging close to €1000 per month more in taxes than what I was a few years ago to bail out the very same banks that are now trying to bail me, my husband and kids out of our home. We now have to live on fresh air. We are poverty stricken.

That’s the thanks we get for sacrificing so much. He lost his job and I was forced to pay almost a thousand euros a month to the government in extra taxes.

How in Gods name could we possibly keep living?

Has our government even tried to help us save our home? Not at all.

In fact they haven’t even tried to stop the courts from taking our home at all and yet they are responsible for our home being taken from us.

Have they tried to restore our pay? No. Instead they are trying to lay the blame at our feet that if they restore any of our pay that we will put this country into another recession. How dare they. They talk about recovery non stop. What bloody recovery? The only ones I see in recovery are the banks and all the self serving politicians!

Not one of them have tried to help us and yet they’re happy enough to hand themselves pay rises of €5000 each. They make me want to vomit. Where are these TD’s and politicians?

And so that’s my story about how life for me and my family has been since we were all forced to bail out banks.

This government destroyed us completely.

I’m a nurse. I’m no longer a proud nurse. I’m well and truly broken and I don’t think I’ll ever live a normal life again.”

A message sent today to Facebook page Support for Nurses, Midwives and Frontline Staff in Ireland, and posted this afternoon. 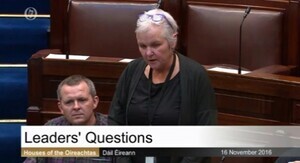 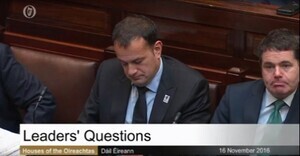 People Before Profit/AntiAusterity Alliance TD Bríd Smith challenges the government’s response to pay restoration and takes issue with John Moran, former secretary general at the Department of Finance, who this morning claimed public service union demands were a “dangerous challenge coming from a minority”.