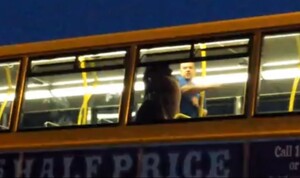 You may recall the assault on a man and a woman on the Number 40 bus near Old Kilmainham village, Dublin 8, in July of last year – the latter stages of which were filmed (above).

They found the guy.

“A Dublin man who carried out a prolonged violent attack on two people in a row over a seat on a bus has received a three-year suspended sentence. [Peter] Harte of Kildonan Road, Finglas, pleaded guilty at Dublin Circuit Criminal Court to assault causing harm to Pedro Mendez [from Portugal] and Gabriella Leon [from Mexico] at Old Kilmainham Road, Dublin on July 24, 2014.”

“Judge Desmond Hogan said Harte must carry out 240 hours voluntary work in the community as part of the suspended sentence and finish up participation with the Restorative Justice Programme. He also said Harte must also undergo drug, alcohol and anger management programmes if deemed suitable and ordered that the €1,500 he had raised as a token of remorse be passed on to the victims.”

“…He grabbed Mr Mendez’s long hair and got him into a headlock and whispered into his ear: “I’m going to kill you”. The victim pleaded with him, saying “Just let me go, I will get off the bus”.

“Ms Leon described Harte’s attack as being like a boxer in a fight. She called gardaí on her phone but Harte continued the attack. Ms Leon began recording the attack on her phone and when Harte saw her doing this he swung at her, knocking the phone away. He punched her face with a closed fist and continued punching her to the back of her head when she turned away from him to protect herself.”

Man headbutted, kicked and punched man and woman on Dublin Bus in row over a seat, court told (Irish Independent)

Previously: Who Is He?