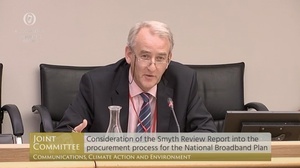 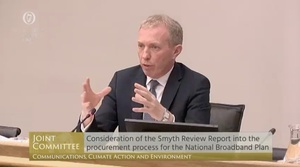 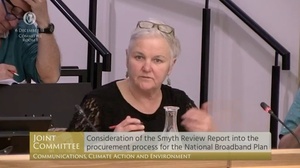 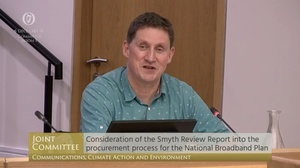 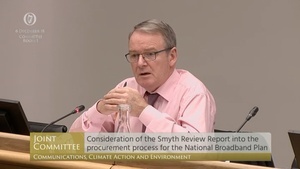 END_OF_DOCUMENT_TOKEN_TO_BE_REPLACED

This is quite bizarre:

Mr Smyth has confirmed that he did not even ask what was discussed at the meeting in New York outside of the 10 minute window that was minuted.

Broadband was discussed in Mr McCourt’s home in Clare but NOT the National Broadband Plan.

Broadband report author, Peter Smyth, in response to questions from FF TD @timmydooley at the comms committee on whether Mr Naughten and Mr McCourt’s meetings broke canvassing rules: “Do I agree breach of rules in strict sense, yes. Do I consider it canvassing? No.” #broadband

Peter Smyth has also told senator Michael McDowell he did not ask Denis Naughten or David McCourt for a written statement explaining exactly what was discussed during the numerous meetings that took place. #broadband

Peter Smyth (top) is appearing before the Joint Oireachtas Committee on Communications, Climate Action and Environment – streaming LIVE above.

Mr Smyth examined the interactions between the former Minister for Communications Denis Naughten and businessman David McCourt, founder and chairman of Granahan McCourt – the last remaining consortium bidding for the National Broadband Plan – as a means to decipher if the engagements undermined the NBP procurement process.

Mr Smyth found that the fact Mr Naughten met with Mr McCourt, or representatives of the other bidders “outside of the process is not in and of itself a basis for finding that the procurement process has been tainted”.

Mr Smyth has already told the committee that he never met Mr Naughten or Mr McCourt face to face during his investigation.

He told deputies that he did not regard their encounters as evidence of ‘canvassing’, but was unable to define what he meant by ‘canvassing’.

In his investigation, Mr Smyth found, as he had to take Mr Naughten and Mr McCourt’s word for what was discussed at two one-to-one meetings and one telephone call:

Mr Smyth also found Mr Naughten’s decision to resign largely allowed for the process to go ahead as his stepping down “insulates the process from any apparent bias created by his engagements with Mr McCourt”.

Oireachtas webcasting is provided by the Houses of the Oireachtas Service, in association with HEAnet, Ireland’s National Educational and Research Network