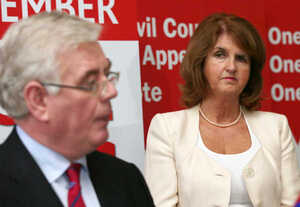 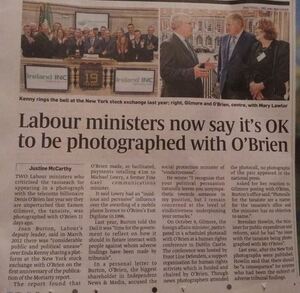 Yesterday’s Sunday Times  reported about a scheduled photocall with Labour leader and Tanaiste Eamon Gilmore and Denis O’Brien which took place on October 9.

“There has been considerable public and political unease about the fact that Mr. O’Brien has continued to pop up at various public events, most recently at the New York Stock Exchange. However, the Taoiseach was invited to attend that stock exchange event. The organisers of the event not the Office of the Taoiseach decided who was on the balcony for the bell ringing ceremony. It is perhaps time for the Government to reflect on how it should in future interact with people against whom adverse findings have been made by tribunals.”

“We do not want to return to the days of, “uno duce, una voce“, the immortal phrase which the former Fianna Fáil press secretary P.J. Mara, himself a tribunal veteran, used to describe Charles Haughey, nor do we want a Berlusconi style media-political complex with its attendant codes of omertà undermining the principles of transparent democracy. In this regard I welcome the statement by my colleague, the Minister for Public Expenditure and Reform, on the introduction of legislation to deal with the registration of lobbyists, ethics for public representatives and office holders and transparency in public life. We should look back to the 1830s in the United Kingdom and the great reform Acts which were introduced to clean up politics and end the rotten boroughs for election to Parliament.”

“We live in a Republic and the representation of each citizen should be what counts rather than the amount of money a particular citizen can spend. We can look forward to a period of reform in which this Government will change the political landscape and our capacity to report and hold to account lobbyists.”

“The Ten Commandments prohibited murder and envy but they did not put an end to sin. Similarly, this House needs to legislate for transparency and accountability from all elected representatives and office holders.”

Bringing Denis Down To Size 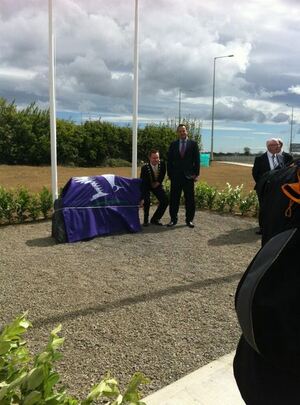 Transport Minister Leo Varadkar (right) and Mayor of Fingal Cllr Cian O’Callaghan at the  opening of new €20.55million N2/N3 link road in west Dublin, which was “part funded by NAMA”.

The link road begins at Church Road, near Tyrrelstown and joins the N2 at the Cherryhound Interchange.

Previously: The Lady Is A Tram