You may recall previous posts in relation to how planning inquiries in relation to seven local authorities – Dublin and Cork City Councils and Carlow, Galway, Cork, Meath and Donegal County Councils – had been organised to get under way by the former Environment Minister John Gormley but were terminated by Environment Minister Phil Hogan, following the 2011 general election.

Mr Convie’s material in relation to Donegal was sent to the Attorney General Máire Whelan for direction and it’s understood she has now sent this on to the Environment Minister Phil Hogan, who is expected to release a review before the summer

Labour’s Minister of State for Housing and Planning, Jan O’Sullivan then announced that a review will take place into the other six authorities.

These reviews are being carried out by town planners and chartered surveyors company MacCabe Durney Barnes.

Following Ms O’Sullivan’s announcement of a new review, Mr Murphy received a letter from MacCabe Durney Barnes, essentially asking him if his complaints still stand, if any have been resolved and he believes their draft statement of issues is accurate.

Mr Murphy said his complaints do still stand, they haven’t been resolved and said he does believe their draft statement of issues reflects his concerns. 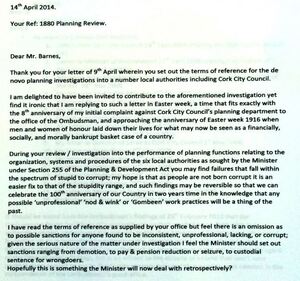