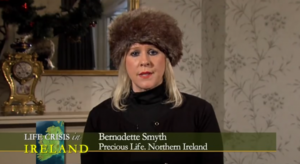 An anti-abortion protester has been convicted of harassing a Marie Stopes clinic director at her Belfast city centre offices.

Bernadette Smyth, who leads the anti-abortion group Precious Life, was warned she could face a jail sentence for her campaign against Dawn Purvis.

The judge said: “This case was run, no-holds barred, in a vicious and malicious fashion.”

He said an investigating police officer had been deliberately slandered.

Ms Purvis had been the victim of an unwarranted attack, the judge said.

Mrs Smyth was also told she will be ordered to pay compensation and would be restrained from the area around the clinic.

With sentencing put back until next month, Mrs Smyth was told her potential punishment could be community service or prison.

The judge said anti-abortion campaigners stationed outside the clinic had been forcing any women of child-bearing age to identify their reasons for entering.

Because of that conduct, he said the range of possible sentencing may go from community service to imprisonment.

Mrs Smyth was told she will certainly have some form of restraining order imposed on her.

Although she left court without making comment, her solicitor described the verdict as “a disappointment for Christians worldwide“. 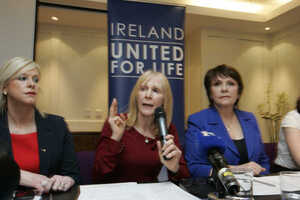 An anti-abortion protester accused of behaving like a witch told a Belfast court: “I’m no witch, I’m a Catholic”.

Bernadette Smyth, who leads the anti-abortion group Precious Life, was replying to a prosecution lawyer.

The lawyer suggested she had laughed at Ms Purvis in a “cackling, jeering, mocking way, in a witch’s manner.”

Ms Smyth replied: “I can’t agree with this court that I’m a witch. I’m a Catholic.”

The case concerns two incidents involving the accused that happened outside the Marie Stopes Clinic, Great Victoria Street, Belfast, in January and February.

Catholic of the Year 2013, awarded by the Knights of St. Columbanus no less.

It’s not a Golden Cleric but it’s a start. 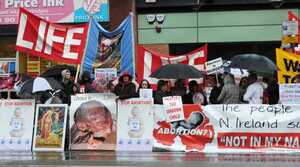 Protests outside the Marie Stopes clinic in Belfast in 2012

An abortion clinic in Belfast has been training volunteers to escort clients past anti-abortion protesters. Escorts trained in the use of body-worn cameras have been accompanying clients of the Marie Stopes clinic to and from its city centre building.

A Northern Ireland Assembly member has said the measure is an over-reaction to the protests. There have been regular protests since the clinic opened in Great Victoria Street in 2012.

Clinic director Dawn Purvis said the protests were having an effect on clients, and that the clinic had to respond. “The women that come to us are very upset and very frightened by the behaviour of the protesters,” she said. “Our volunteers have been through a vetting scheme and a very intense training course in de-escalation methods and how to deal with conflict.”

The escorts have also been trained in additional security measures including body-worn CCTV cameras and distress calls.

However, DUP MLA Jim Wells supports the protests outside the clinic and said they are important and peaceful. “I have spoken to some of the protesters and they do try to talk to women and persuade them not to have an abortion, but certainly watching what goes on, I don’t see anything that would cause me concern.” He said the clinic has gone “over the top” by introducing the escort scheme and additional security measures.

Meanwhile, an harassment case against Precious Life founder Bernie Smyth is due to resume on Tuesday next.

An American anti-abortion healthcare provider is planning to open a clinic in Belfast, the BBC has learned. Stanton Healthcare aims to have a clinic operating in the city centre by early 2015.

Representatives from Stanton Healthcare recently visited Belfast, and the BBC understands that they have identified premises on Great Victoria Street in the city as a site for the clinic. The facility would therefore be close to Belfast’s Marie Stopes clinic, which has been open since 2012.

The BBC understands that Stanton Healthcare plans to offer pregnancy counselling and also medical facilities like ultrasound scans. The firm has claimed that over 90% of what they describe as “abortion-vulnerable women” who have ultrasound scans at their Boise clinic choose to give birth.

However, its staff are working closely with the Northern Ireland-based anti-abortion organisation, Precious Life. Bernadette Smyth from Precious Life welcomed Stanton Healthcare’s plans. “We would hope that women in crisis pregnancy would be given free ultrasound, free pregnancy tests and support,” she told BBC Radio Ulster’s Good Morning Ulster programme. “We want to provide a better service that’s not available here.” 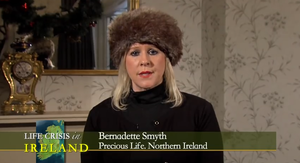 Q. Do you not think you are adding to a vulnerable woman’s distress by trying to make her feel guilty about her choice?

Q. What about the young girl or woman who is suicidal because she doesn’t want to go through with the pregnancy?

A. Well what do we do when people are suicidal? Take a woman who has just given birth and she has postnatal depression. I suffered from severe postnatal depression and like many women I needed someone to help me through that difficult stage. Would eliminating that baby, killing that baby have prevented me from being suicidal? I needed medical intervention. In some cases women who are suicidal during pregnancy may even need to be institutionalised in some cases.

Q. Are you saying a woman who is feeling suicidal about their pregnancy and doesn’t want to continue with the pregnancy should be institutionalised?

A. Well if her life is at risk.

Q. So you would do this against her will?

A. Not against her will, but if someone’s life is in danger we immediately have to offer medical intervention. Abortion does not eliminate suicidal thoughts. Abortion causes suicidal thoughts. I don’t believe aborting a child for any reason is in anyway beneficial to that child.

Q. What about the young girl in the republic, raped and suicidal. Was it not cruel to force her to continue with her pregnancy?

A. Well how much more cruel would it have been to rip that child from her womb. A loving society offers support and help to women. If she was suicidal she should have received immediate psychiatric care and sometimes that involves medical intervention that would include hospitalisation and the proper medication. The right decision was made in this case not to abort the baby. She’ll never regret giving birth to her baby but she would have regretted an abortion.