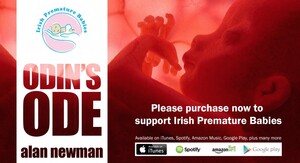 Available at the link below

Today sees the release of ‘Odin’s Ode’, a song created using the heartbeat of Shauna Fowley and Alan Newman’s newborn son, Odin. Odin was born prematurely in May this year, and passed away after six weeks of battling for his life.All proceeds from the song will go toward the Irish Premature Babies (IPB) charity. IPB helped Shauna and Alan through the birth of Odin’s sister Lily Kate in 2012, who also passed away after being born prematurely.

Alan works as a music and video producer, and felt inspired by his son to create the song, which he hopes will now raise funds to help other families going through similar circumstances. Singer ‘Funzo’ added vocals to the song, working with Alan to make a heartfelt and hopeful piece of music, celebrating Odin.