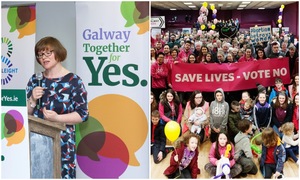 From top: (left to right) Orla O’Connor, Co-Director of Together for Yes campaign speaking in Galway; supporters of the Pro Life Campaign and Love Both project, also in Galway; Ciaran Tierney

Ahead of the abortion referendum on Friday, May 25, 2018, Ciaran Tierney attended the launches of both the pro-choice and pro-life campaigns in Galway.

Two meetings in the same city, but they felt like different worlds.

As campaigning begins in earnest ahead of Ireland’s abortion referendum on May 25, the battle lines were drawn recently when both sides of the debate launched their respective campaigns at a series of regional events and rallies throughout the country.

Two very different events took place in Galway within 48 hours of each other which underlined the strong feelings in both camps and the intense battle expected to win the hearts and minds of undecided voters over the next seven weeks of canvassing.

Ireland has one of the most restrictive abortion laws in Europe and the legislation, known as the Eighth Amendment, which acknowledges the equal right to life of the mother and unborn child was passed by referendum after a bitter, divisive debate in 1983.

Most of those who will vote on the issue next month would not have been around or entitled to vote 35 years ago.

It was notable at the launch of the ‘Together For Yes’ campaign in Galway that many young women in their 20s and 30s were hugely engaged in a political issue for the first time.

Young women made up the majority of the 200-strong attendance at the Harbour Hotel in Galway city centre where a range of seekers called for the repeal of the Eighth Amendment in order to legalise abortion in Ireland for the first time.

For Orla O’Connor, Co-Director of Together for Yes, the key issue is to show people that abortion already is a reality in Ireland, but that women are being forced to travel to the UK or Europe for terminations or take illegal pills in secret at home.

Although canvassing had only just begun, she said that those who were in favour of change were receiving a very positive reception at the doorsteps.

“A really important part of our campaign is making sure that people know that women are already travelling to the UK every day or taking abortion pills at home, in secret, but they feel they cannot go to a doctor. It’s already a reality here,” she said.

“Our experience being out leafleting or canvassing is that a lot of people have changed their minds on this issue. People have seen that the Eighth Amendment did not work. It did not stop people from having abortions overseas and it also had devastating consequences when we think of, for example, the death of Savita Halappanavar here in Galway.”

Six years ago, Savita’s death at University Hospital Galway (UHG) made headlines all across the world and galvanised activists in the West of Ireland to seek a change in the law.

The young Indian dentist is remembered at a candlelight vigil in the city on her anniversary every year.

Savita (31) died from blood poisoning at UHG after doctors refused to terminate her 17-week long pregnancy. When the distressed young woman requested a termination in the hospital, she was told: “This is a Catholic country.”

She had presented to the hospital with back pain in October 2012, was found to be miscarrying, and died of septicaemia a week later. The resultant outpouring of anger revived Ireland’s abortion debate.

“It’s important for us to make sure that people come out to vote. Our feeling is that people want change. This is affecting thousands of women each year and people have changed their minds about this issue. They see that this is necessary. We are confident, but we are not complacent,” said Ms O’Connor.

She said that the Marriage Equality referendum in 2015, when Ireland became the first country in the world to introduce same-sex marriage via a popular vote, showed how much Irish society had changed over the past 35 years.

Ms O’Connor said that the issue had galvanised young Irish people abroad so much that many were planning to fly home just to vote on May 25.

Less than 48 hours after the Together for Yes launch, the Pro Life Campaign and Love Both project came together for a rally to mobilise support for a ‘no’ vote at the Leisureland conference hall across the city in Salthill.

Bus-loads of supporters from throughout the West of Ireland attended the event. It was notable that there were far more elderly people and families with young children in attendance at the ‘Stand Up for Life’ event.

There was also far more merchandise on show in the vast hall, including graphic images, posters, and sweatshirts, calling on people to vote no on May 25.

During an extremely well-choreographed event, everyone was asked to move to the front of the hall to take a large group photo to mark the launch of the ‘Vote No’ campaign in the West of Ireland.

There is a widespread perception out there that there is far more financial backing available to those who oppose repealing the Eighth Amendment, including funds from the United States, and this was very much in evidence at Leisureland.

One of the organisers, Katie Ascough, defined next month’s referendum as an “absolutely defining moment” in Irish history.

“I want you to think about the thousands of lives that will be protected when we win this referendum,” she said, to a huge round of applause. “There won’t be any second chances to save the Eighth Amendment. We must stand united.”

Another speaker, Bernadette Goulding, claimed the Irish Government had “awakened a sleeping giant” by attempting to repeal the country’s abortion ban.

“Those who are pro-abortion don’t acknowledge the grief women experience after having an abortion,” she claimed. “No country is perfect but we all need to be proud of Ireland’s abortion laws.

She claimed that the birth of a child “heals the effect of rape” and called on people to stop rape from happening rather than kill an unborn child.

One of the organisers of the launch, Eilis Mulroy of Galway for Life, said anti-abortion campaigners were incredibly encouraged by the huge number of people who were enthusiastic about protecting Ireland’s ban on abortion.

“Certainly, Ireland has changed since the 1980s, and there’s a lot of positive change, but not on this topic. I’m very encouraged that recent opinion polls have shown there is no majority in favour of repealing the Eighth Amendment. If you look at the numbers here tonight, you couldn’t but be confident about a ‘no’ vote on ballot day.”

Ms Mulroy said it was too easy to “stereotype” people, but it was clear from the huge gathering in the hall that a huge cross-section of Irish society was concerned by the prospect of having legalised abortion.

“I know many people who have been through an abortion and, for many of them, it wasn’t their own choice. It was the people around them. The challenge for us is to be the type of society that supports women,” she said.

When it was put to her that many people would have a difficulty with the term ‘social’ abortion, given the trauma involved, she said that every abortion was a tragedy and claimed that one in five pregnancies in Britain ends in a termination.

“Once you introduce a liberal or unrestricted regime, it becomes socially acceptable in the same way as the smoking ban. You can probably remember being able to smoke on an airplane, but now it’s socially not acceptable, because laws change behaviour. If you say that some people have less of a right to live than others, of course it’s going to make an impact,” she said.

“This proposal is for unrestricted abortion up to eight weeks. I think it’s really important that people are straight and that the facts are out there. We would encourage everyone to be respectful of each other. It’s important that the science and the truth about ‘abortion culture’ and how it harms babies needs to be articulated, and given fair treatment in the media debates.”

An intense period of campaigning is now underway to win over undecided voters ahead of the referendum on May 25.

Ultimately, the real-life testimonies of women across Ireland could be pivotal in terms of deciding the outcome of the vote.

Arlette Lyons of a group called Terminations For Medical Reasons (TFMR) spoke of her personal trauma when she was forced to travel to England for an abortion after being diagnosed with a case of fatal foetal abnormality six years ago.

“We were expecting our third baby when we found out she had a fatal condition at 12 weeks,” said Ms Lyons. “I expected something to be done there and then, but I was told that there was nothing that could be done for me and my family here in Ireland.

“To be given the news that my baby was going to die and then to be told that the only options were to go to the UK or to go full term, I actually thought I was the only one this had ever happened to. The staff at Liverpool Women’s Hospital were so understanding, they had seen Irish couples in this situation so many times.

“I travelled back home by boat, because I could not face the ‘plane. I did not want to fly after having my termination. I felt travelling by boat was less public. When I got back to Ireland, an anger just came over me. That’s why I just went public. It was unjust, what happened to me. Since then, I came together with other women to form TFMR and at least 400 families have been in contact over the past six years.

“The only way women and couples with fatal foetal abnormalities can receive the help they need is to repeal the Eighth Amendment. My story could be anybody’s story, even though I hope it does not happen to anyone else. We need to stop punishing tragedy.”

Rallying the troops for a divisive campaign (Ciaran Tierney)