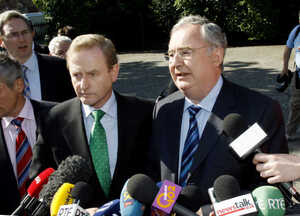 In 2009, when in Opposition, Taoiseach Enda Kenny and Labour’s Pat Rabbitte were very concerned about the immunity granted to drug dealer Kieran Boylan.

This is what Pat Rabbitte had to say in the Dáil to then Justice Minister Dermot Ahern, of Fianna Fáil.

“I am particularly concerned at the recent case involving the alleged drug dealer and Garda informant, Mr. Kieran Boylan, which should be vigorously and efficiently investigated and, if appropriate, matters should be referred to the appropriate authorities. I understand that the commission is engaged in a public interest inquiry in this matter, but there needs to be a timeframe and the report needs to be advanced urgently.

“It is not lightly that I mention the name of any citizen in this House. It has been alleged that Mr. Boylan, a drug trafficker, had a relationship with the Garda that facilitated collusion and resulted in Boylan being shielded from drugs charges by a small group of gardaí in this city. It is alleged that while working with the Garda, Mr. Boylan was trafficking drugs into this jurisdiction with the knowledge of certain members of the Garda who appear to have turned a blind eye and did all in their power to keep him out of prison.

“Questions must be answered in respect of why charges against Mr. Boylan for importing heroin and cocaine worth an estimated €1.7 million, seized at a truckers’ yard in Ardee, County Louth in the Minister’s constituency in October 2005, were dropped and a nolle prosequi entered. It is alleged the reason is that Mr. Boylan threatened to reveal details of his relationship with members of the force, which would cause embarrassment. Moreover, it has been reported that when people discovered drugs on Mr. Boylan’s premises in 2004 and reported the matter to the Garda in confidence, they were subsequently threatened by Mr. Boylan and his associates, and the Garda appears to have failed to act on the information in an appropriate or any manner at all.

“The breach of trust that would result in a confidential report to the Garda by members of the public being ignored and then the person complained about being told about it and threatening those who were carrying out their civic duties is a gross breach of trust and must be investigated. Internal Garda inquiries are no longer satisfactory in matters as serious as that involving Mr. Kieran Boylan. It is essential that the commission carries out this investigation with great care and efficiency but within a specific and definite timeframe. Nothing less is required at this delicate moment in the history of the Garda Síochána.”

While Kenny also aired his grievances in an Irish Examiner article at the time:

“Fine Gael leader Enda Kenny said the licence issued in September to Boylan, despite numerous “Good Repute” checks, contradicted national policy against drug crime. With respect to allegations of a Garda cover-up, he said, given the information in the public domain Mr Dempsey (then Transport Minister Noel Dempsey) should revoke Boylan’s licence.”

Earlier: “Black Ops Being Run Off The Books”

Pat Rabbitte’s new TV licence will apply to everyone, “even if they do not have any device” #Dáil

“The programme for Government commits to examining the role and collection of the television licence fee in the light of the existing and projected convergence of technologies and the transforming of the television licence into a household based public broadcasting charge to be applied to all eligible households and applicable businesses, regardless of the device used to access content or services.”

“In line with this commitment, my Department is involved in the ongoing analysis and policy development work that is necessary in advance of implementation of any change that may be required.”

“Whatever the system of funding, the rationale for providing funding will continue to apply and any change that may be implemented must continue to provide a secure funding base for public service broadcasting and content.

“It is also important that any change to the system of funding should take account of the reality of new mechanisms to access such content and services and the pervasiveness of such content in today’s society. Publicly funded public service broadcasting and content are now available to everyone on an ever-increasing range of platforms and devices and, in fact, access is not dependent on the ownership of a device.

“In short, everyone benefits from the availability of these services, regardless of how content is accessed or relayed to the public and, therefore, it is my view that the cost should be borne by society as a whole.” 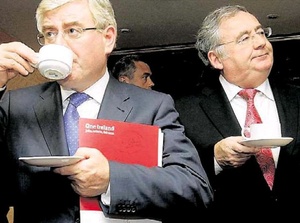