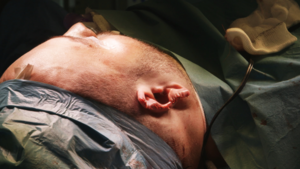 The first instalment of the new four-part documentary series Trauma will begin at 9.30pm.

Tonight’s episode will include a focus on shop owner Milan Hosek who was treated in the Mater Hospital’s emergency department after his ear was bitten off when he was subjected to a racist attack on a street in Dublin.

Father-of-three Milan goes to A&E carrying the severed part of his ear in the hope that surgeons can reattach it.

He tells viewers that he was attacked by two men who started abusing him saying things like: “f**king foreigners in our country”.

“I felt really bad when the guy started spitting at me and telling me I’m a foreigner in his country”, he tells viewers. One man then urged his companion to “bite” Milan’s ear off and they attacked him.

Both men ran off after the incident. During the attack, they also told Milan they knew where he lived prompting him to ask the Gardaí to watch his family home.

Dr Sinead McArdle, Consultant in Emergency Medicine at the Mater tells viewers that: “to remove a part of someone’s body and the force required to take the whole pin of an ear would be unusual”.

In this clip, Milan and his wife Joanna, who hail from the Czech Republic and have lived here since 2003 having opened a city centre bicycle shop, talk about the racism that they have experienced, with both of them attacked within a 20-day period.