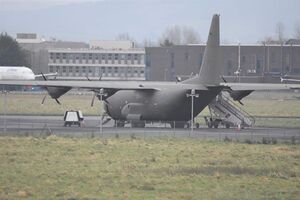 A British RAF Hercules  at Shannon  Airport on December 29, 2016

British military chiefs are facing a dressing down over the unapproved landing of RAF aircraft at Shannon Airport.

The diplomatic spat was revealed after a Hercules transport plane landed at the airport on December 29 without seeking clearance from the Government in advance.

Foreign Affairs Minister Charlie Flanagan said: “The Government views breaches of the procedures set down for the granting of permission for such landings with the utmost seriousness. I have instructed my officials to discuss the matter further with the British Embassy with a view to ensuring that correct procedures are followed in future.”

The British Embassy in Dublin told Irish officials that the RAF Hercules landed in Shannon to refuel.

As Ireland is a neutral country, permission should have been sought in advance and assurances given that the aircraft was unarmed, carried no cargo of arms, ammunition or explosives and that it was not on an intelligence-gathering mission or a military exercise or operation.

British diplomats told Irish officials there had been a “communication breakdown”.

“The embassy has confirmed in writing that the purpose of the landing was refuelling, and that the flight was unarmed; carried no arms, ammunition or explosives; and was not engaged in intelligence-gathering nor formed part of a military exercise or operation,” Mr Flanagan added.