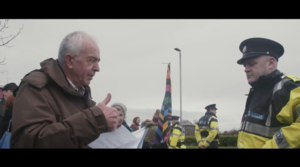 Shannonwatch, which monitors the use of Shannon Airport by US military planes, reported that more than 730 US military flights landed at the airport in 2016 – more than two a day over the entire year.

In light of the revelations that the United States were open to leaving Shannon in 2007, but did not at the behest of the Irish Government, add to this the obvious security concerns of having military personnel at a civilian airport, and factor in the cost of at least €45million to the Irish taxpayer.

We ask the question, why is the US military still using Shannon Airport?

We headed down to Shannon and talked to Ed Horgan and John Lannon of Shannonwatch, who have been part of a monthly peace vigil which has ran unbroken for the last nine years.

Why Is The US Military Still Using Shannon Airport? (Rabble)

‘We Didn’t Go Into Iraq With Kalashnikovs’

Here To Save The World

23 thoughts on “Meanwhile, In Shannon”