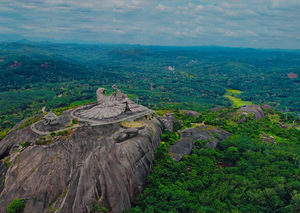 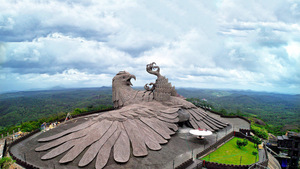 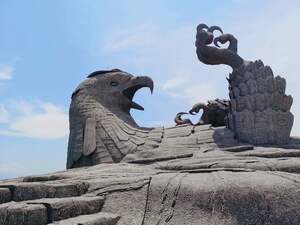 A vast bird sculpture sprawls on a mountaintop at the 65 acre environmental tourist destination of Jatayu Earth’s Centre at Kerala in India. The centre is a collaboration between the Tourism Department of Kerala and film director Rajiv Anchal. The bird is the stuff of legend.To wit:

Based on the epic story of Ramayana, Jatayu is a noble bird of divine origin who lost his wing and fell while fighting to protect a young woman named Sitha. The bird as recreated in concrete at the  Center is 200 feet long, 150 feet wide, and 70 feet tall, with stylized feathers and enormous curled claws.