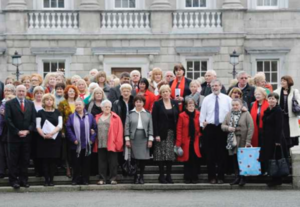 During their discussion, Ms McCarthy spoke to Ms O’Connor about how the United Nations Human Rights Committee recommended that those who carried out symphysiotomies in Irish hospitals be prosecuted.

She then specifically talked about Noreen Burns, originally from Cobh, Co. Cork, who died very recently on July 19, 2014. In the Sunday Times at the weekend it was reported that Ms Burns had had a symphysiotomy, after she had her first child by caesarean section in 1959. The paper reported: “The child, Catherine, died. An ‘on the way out symphysiotomy’ (post-caesarean section) was performed to avert the need for future sections, thus allowing her to have many more babies. She went on to have six children, all delivered by either emergency or elective caesarean sections.”

Justine McCarthy: “At a press conference last week, responding to the UN committee’s report, you told the story of a 92-year-old woman who is suing over a symphysiotomy and she received a solicitor’s letter, I think it was on behalf of the National Maternity Hospital saying that she should accept the State redress offer and discontinue the proceedings against the hospital and, if she didn’t do that, they would seek legal costs against her.”

Marie O’Connor: “That’s correct, I actually have the letter here. The National Maternity Hospital threatened this 92-year-old applicant with legal costs should she decline a so-called redress scheme from the State, which has clearly been found defective by the UN human rights committee. And should she have the temerity to continue her legal action against the hospital, and of course, in a sense this had echoes of a previous outrage I suppose one can only call it, and that was a threat again of legal costs – which of course, as we know, is one of the most intimidating threats that can be levelled at a citizen – and this was made to Reena [Noreen] Burns. And, it’s a long story, I can’t go into it all but, suffice to be said, that the hospital only consented to having Reena examined after she had been placed on a ventilator, after her health had disimproved so significantly. And this, after two earlier requests, by the solicitors acting for Reena. Those requests were ignored. On the 4th of July, following receipt of a GP report, which said that Reena was ‘imminently grave’ was the term used. A fourth notification, from the solicitor again, the hospital said that the application for an early hearing was totally premature. And that they would be seeking costs for having to appear in court in order to block that application for an early hearing. And it was only after Reena had been placed on a ventilator, on the 8th of July, that the hospital consented to having her finally examined by their own doctors.”

McCarthy: “But it was too late because…”

O’Connor: “And at that point…”

McCarthy: “Mrs Burns has died since.”

O’Connor: “That’s right, yeah. Tragically. And she spent the best part of the last three years hoping and believing that she would come through this.”