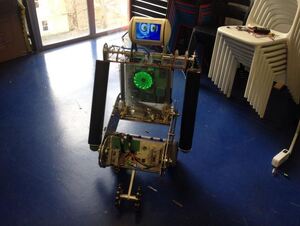 “The robot, nicknamed “Robbie”, was built for Cork teenager Joanne O’Riordan, who is one of only nine people worldwide living with tetra-amelia, a condition in which the sufferer is born without arms or legs. In April 2012 O’Riordan addressed the UN at the ITU’s “Girls in Technology” conference and offered the challenge for someone to build her a robot.”

“Taking up this challenge is Assistant Professor Kevin Kelly, of Trinity’s School of Engineering, along with a team of young engineers.”

“The prototype is a humanoid robot, with features like a head, torso, legs, and arms, and when fully extended stands at 140cm. In order to communicate with people the head has a face on an LED screen, which can display emotions and blink. Instead of hands the machine has flexible grippers, which are balloons filled with coffee granules. Under normal circumstances the coffee particles behave like a liquid, but when the air is removed they jam into place and become rigid. By pressing the balloon against an object and creating a vacuum the robot can use this method to pick objects up, as it will conform to the object’s natural shape when soft and then harden around it.” 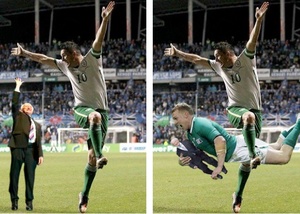