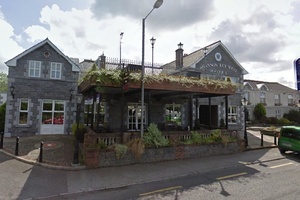 The Department of Justice has confirmed that a plan to provide an accommodation centre for asylum seekers at a disused hotel in Rooskey, Co Leitrim, will not now go ahead.

An issue over the lease of the property, which was damaged in two arson attacks in the last four months, is the reason not to proceed.

Plans for Rooskey asylum centre will not go ahead (Ciaran Mullooly, RTE) Rooskey resident Niamk Kiernan (top left) clashes with anti-racism activists, including Izzy Kamikaze (top right), during a protest at recent arson attacks at a hotel in the village earmarked for Direct Provision….

I’d say I’m probably a bit more local than you. Are you racist against people fro ten miles up the road? Cos really that won’t generate a lot of tourism.

But I am at home.

I won’t be going under house arrest for your convenience, Jack. Sorry to disappoint you, but you don’t get to tell other people where they can & cannot go. Protest over direct provision plans for hotel in Rooskey (RTÉ) At the Shannon Key West Hotel in Co Leitrim.

Three fire brigade units responded to reports of a fire at the building which has been earmarked for a direct provision centre and which was the subject of a suspected arson attempt last month.

“…there is no visible signs of a blaze or smoke emerging from the building, and an investigation is under way.

Locals say a report was made that a non-identified object had been thrown on to the balcony on the first floor of the building, but this has not been confirmed by gardaí. A crowd gathers outside the hotel at Rooskey as part of the anti-racism gathering pic.twitter.com/RE2bzzPaXQ

A protest organised by Leitrim And Roscommon United Against Racism outside the Shannon Key West Hotel earmarked for Direct Provision and the target of an arson attack last week.

The rally got under way at lunchtime with speaker after speaker condemning the Direct Provision system which is now in its 19th year.

Organisers said they want to see an end to the Direct Provision system in Ireland and the manner in which direct provision centres are imposed on communities without consultation.

The participants from Leitrim, Roscommon and beyond said they stand in solidarity with the people of Rooskey.

There were not many townspeople in attendance. Some feel the events of the past week have unfairly drawn negative attention to the town.

Locals say while refugees would be welcome there are not sufficient facilities or services in the village for them.

Rally against racism held outside fire-damaged hotel in Rooskey (RTÉ) An anti-racist gathering will be held tomorrow at 12.30 pm in Rooskey [County Roscommon] at the Shannon Key West Hotel.

The gathering is intended to give people from the Leitrim Roscommon area an opportunity to condemn the arson attack on the Hotel and to reject the kind of casual racism that is increasingly directed at members of ethnic minorities, asylum seekers and refugees.

Those organising the event want an end to the Direct Provision system which incarcerates and isolates asylum seekers.

They are also opposed to the manner in which Direct Provision centres are imposed without consultation on small communities.

However the existence of the system cannot be used as an excuse for racism and for arson.