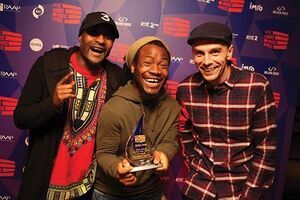 01. Honestly? This was the YMLT we were hoping to write this morning – mynameisj0hn, GodKnows and Murli took home the Album of the Year last night at the Choice Awards in Vicar Street.

02. Our thoughts on Let the Dead Bury the Dead, from last year’s year-end list:

“Rusangano Family are more than a critically-acclaimed Irish act that’s threatening to go mainstream. They represent a moment in Irish culture, a turning point, a look at the ever-changing Irish identity, the meeting point of tradition and progress, the emerging Irish multiculture.

Equal parts personal earnestness on the immigrant experience in Ireland and social commentary from the perspective of someone raised latterly in the culture, Let the Dead Bury the Dead is, in their words, “an objective album”.

But as important as the weight it carries, the tunes it bears across its near-40-minute runtime run the gamut, from the mid-paced stepping of Kierkegaard to the flat-out, shirt-waving banger that is Soul Food, there’s not a single doubt of the latter either. A momentous accomplishment.”

03. Streaming above are the album that took home the championship, available for streaming and download, and a Guerrilla Session & interview with Ray Wingnut released this morning.

04. See the champs on tour around the country over the course of the next month, including the National Concert Hall in Dublin, among other dates. See here for the full rundown.

Thoughts: The hardest-working outfit in Irish music today begin to reap the rewards of their grind. Proof that hard work, persistence and dedication always pay off. 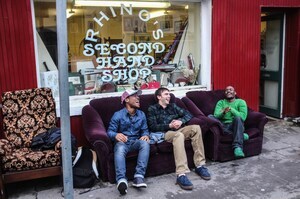 1. From an intersection of cultures, to the forefront of Irish hip-hop, Limerick/Zimbabwean outfit Rusangano Family have come into their own since assuming the name for their collaborative efforts in late 2014.

2. In keeping with themes of society, identity, belonging, and the celebration of difference and diversity, the trio specialises in a fusion of hip-hop and electronic sounds/sub-genres.

3. Comprised of DJ mynameisj0hn, and MCs GodKnows and Murli, the project came about from their collaborative work in 2013, which resulted in that year’s EP with producer Graeme S, and their first album (and namesake) Rusangano/Family in May 2014.

4. The resultant critical acclaim for their records and riotous live excursions led to supports for Snoop Dogg, Run the Jewels, Young Fathers and BadBadNotGood, as well as festival appearances all over the country. Most recently, they went Stateside to play this month’s SXSW festival in Austin, Texas.

6. The band explains the long-player’s somewhat cryptic title: “Let the Dead Bury the Dead can mean a lot of things to a lot of people. A phrase that conjures ideas of regret, remorse, hope, change, letting go and the resolve to follow one’s own path. To move forward, we must also leave things behind.”

7. The trio are launching the record with a string of dates around Ireland throughout April. Friday the 8th sees them hit The Kino in Cork with Lakerama in support, while on Saturday the 9th, they head for Dublin’s Sugar Club with support from Ben Bix and Feather. Friday the 22nd, they’ll be at Dolan’s Warehouse in Limerick, before playing DeBarra’s in Clonakilty on Saturday the 23rd.

Verdict: One of the country’s most exciting live acts, and one of our most vital and forward-thinking propositions, full stop. Get involved.