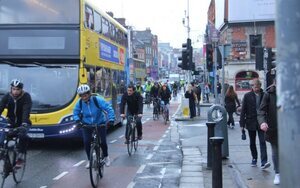 I read with interest your Editorial on cycling safety.

I drive, walk, and cycle around Dublin regularly. I have been knocked off my bike three times, each time by a driver.

The third time, recently, another car driver turned right across a junction I was going through (and where I had right of way) onto me.

These incidents all occurred in broad daylight, and I was perfectly visible to anyone who looked for me. I was fortunate in these to have escaped without serious injuries, but many other people who cycle have not been so lucky.

The common link is that these people driving did not look for the cyclist they were sharing the road with.

While it is all very well to ask cyclists to behave better, and there is a role for that, it just amounts to victim-blaming; what kills and injures others are the people driving cars.

What we really need is to separate vulnerable road users such as cyclists from cars with proper cycling infrastructure such as exists in many European cities like Copenhagen and Amsterdam. Where we do have to share the road, we need to educate drivers to be more aware of people on bikes.

A bicycle has many advantages over a car in Dublin: it’s cheaper, it’s faster in traffic, it’s better for the environment, parking is easier, and it’s better for your health. With better infrastructure it could also be safer.

For each #complaint by one of these #irresponsible #ThugsOfTheRoad (#cyclists) https://t.co/Z8ZYdeu60Y I have #footage from my car’s #DashCam showing 10/15 of them #cycling #recklessly and #illegally in #Dublin EVERY SINGLE DAY. They are the ones causing #accidents & #injuries pic.twitter.com/A0tsOqnH4m