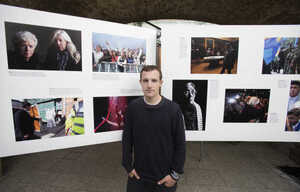 Photocall Ireland’s Sam Boal, whose photographs grace Broadsheet on an almost daily basis, has been chosen  to represent Ireland at the World Press Photo Awards exhibition in Custom House Quay Building in the IFSC, Dublin.

Work by RTÉ’s Patricia O’Callaghan and Aisling O’Rourke, of Clare FM is also included in a showcase of new talent

Sam has been with Photocall Ireland since 2011.

Nine photos (above) by Sam have been chosen for the exhibition which launches tonight and continues at CHQ until November 15.

“With every member of the public possessing high-resolution camera-phones and the continuing debate concerning future news platforms, the place of the press photographer is under pressure as never before. However if you love the job as I do, all this is quickly pushed aside. There’s more to a strong image than just point-and-shoot.”